Below are free play series for offense. Play series are 3-5 plays that all work off and complement one another. Click the links below for immediate access. Don’t just run plays, run a series of plays!

-Stretches the defense out horizontally, which creates running lanes across the entire formation.

-Forces the defense to defend the entire width of the field.

-Power & Buck Sweep run power to the TE side and have screen/passing options to the trips side.

– Creates alignment conflict for the defense. Very difficult to defend.

-Always you to spread the field, while still remaining a threat to run the football inside.

– The H back will create alignment conflict for the defense and an H will give you several different blocking and play options.

-Power, is the base play. This play utilizes a kick-out by the H back.

-Counter, is a great play that goes away from the strength of the formation.

-Bubble, is a power/counter RPO that will give you the option to throw the quick bubble screen to your Z in space.

-Utilizes an unbalanced formation. This will give you extra blockers at the point of attack and it will create another gap for the defense to account to for.

-Rocket Sweep, allows you to get to the edge very quickly. Stretches the defense out horizontally while only having to block 2-3 defenders to gain big time yardage.

– Belly, complements the Rocket Sweep very well. Once the defense starts to widen in an effort to stop Rocket, that’s when you hit them underneath the motion with Belly.

-Trap, fast hitting interior play. It’s a great complement to the Rocket and Belly play. This is a great play that takes advantage of penetrating defensive tackles.

– Gives you multiple blockers at the point of attack.

– The play is easy to install and is very deceptive.

– Tags can be utilized to throw a change up at the defense.

– Read and RPO screens can be easily added.

– This is a great play that will allow you to utilize an athletic QB.

Overview: The twins formation spreads the defense out horizontally. If they do not respect the spread formation you hit them outside. If they spread out with the formation you attack inside. This play series also utilizes a mobile QB.

-Spread the defense out horizontally with twin receivers to both sides.

-Make the defense defend the QB as a running threat. -Creates alignment conflict for the defense.

-Kill man to man coverage with the “RUB” play. -Jet sweep can be executed out of various formations.

-Attack the edge of the defense very quickly.

-Force the defense to adjust to the motion of get beat.

-Only have to block 2-3 defenders to get big yardage.

-Lets your athletes work in space.

The Inside Zone Wham Series

The zone blocking is becoming very popular on the youth, high school, college, and even the professional level of football. In the Inside Zone blocking scheme each lineman is responsible for blocking their play-side gap and getting vertical movement on the defender in that gap. 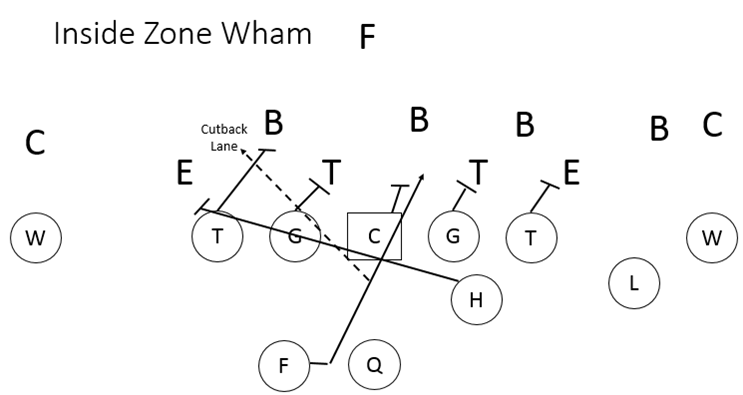 -Forces defense to be disciplined, assignment football. They just can’t pin their ears back attack.

-Easy to implement and works on every age level of youth football.

-Simple blocking scheme that gets a push and gets the second level (linebackers) blocked. -Gets your athletes the football out in space very quickly.

-Only have to get 2-3 defenders blocked to gain big yardage.

-Put the defense in series conflict. Forces them to either adjust or get beat!

-When the defense sells out to stop the rocket sweep, hit them with counter or the play-action passing play!

This belly series works very well off of rocket motion action. The motion will influence the defense to widen in an effort to contain rocket sweep. Once you see the defense widen to defend rocket sweep, hit them inside with belly. -Utilizes rocket motion, which will force the defense to overflow.

-Between the tackle play that takes advantage of overflowing defenses. 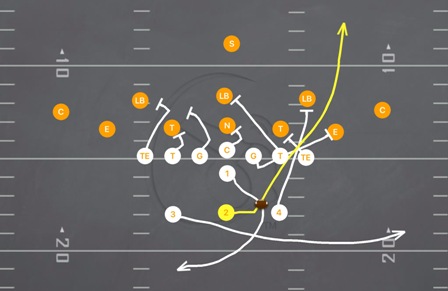 -Balanced formation that makes the defense defend both side of the formation.

-Gets several blockers at the point of attack.

-Double TEs gives you run blocking options at the point of attack (down blocks & double teams). -Makes the defense defend both sides of the formation. -Easy to install and works very well in youth football.

– Great formation for putting the defense in conflict.

-Twins formation will force the defense to respect the quick passing game. This will open up the inside running game.

The Hammer Package is a way way to line up and pound the ball down the defenses throat. It’s a formation that tells the defense that we are running the football and there is nothing they can do to stop it. It’s the ultimate statement package. 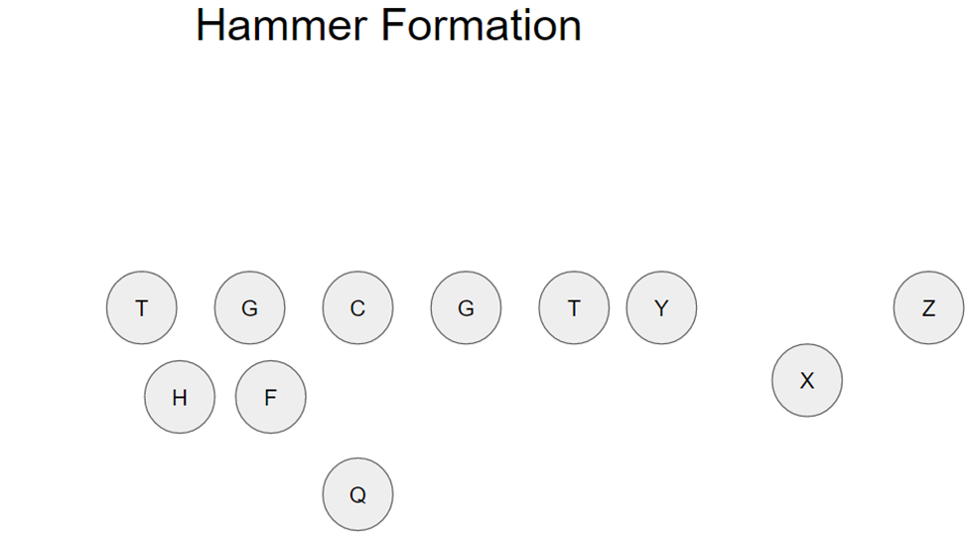 -Unbalanced formation that will allow you to outnumber the defense at the point of attack.

-It’s the ultimate make a statement package! Line up and run the football!

-Easy to install, very effective on all levels of football. -Part 1: The Philosophy of the Air Raid Offense