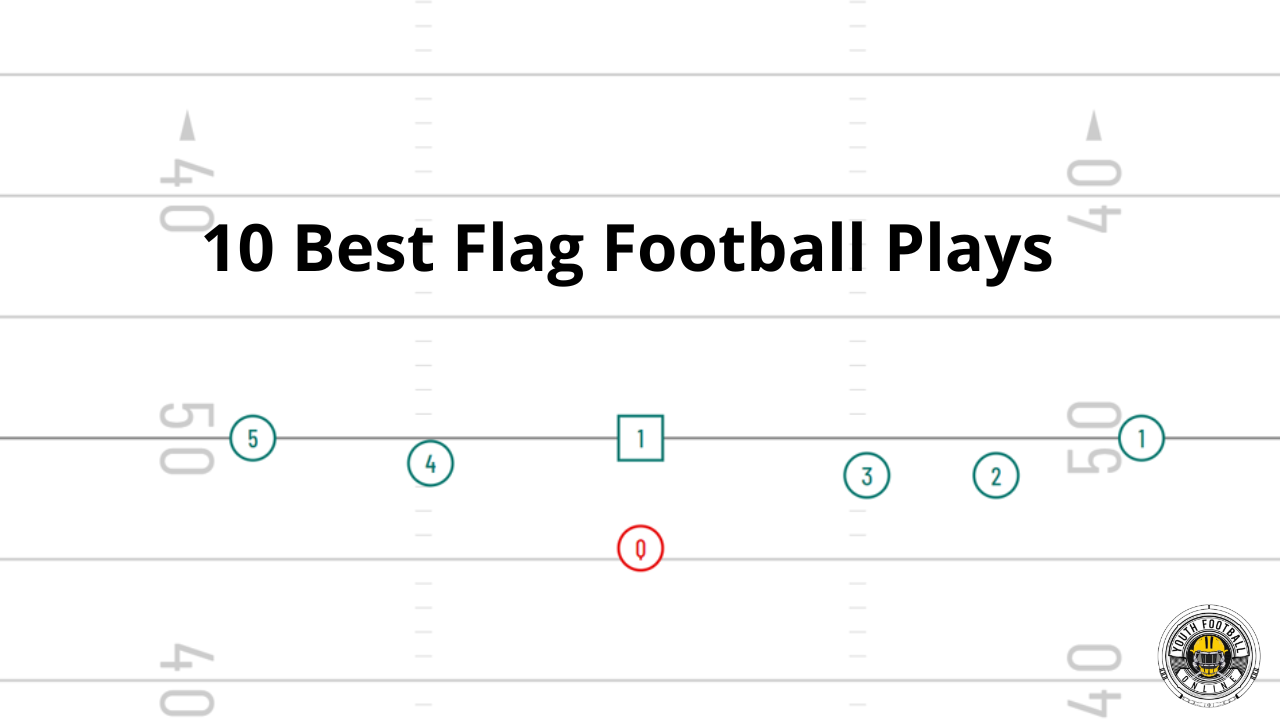 All players are labeled 1-6 with the QB labeled Q. When you show the kids the play you just assign your players a number and they will run the routes of their assigned number every time. This keeps things simple and efficient. You can easily move players based on skillset around as well.

The slot-fade is a great concept because it provides you with an all coverage beater to the trips side and a man coverage beater to the two wide receiver side. The slot-fade is very difficult to defend because most flag defenses will play press man. In press man the defensive back will turn their back to the QB and have problems tracking the football. It’s important that the (2) executes an outside release, then fades to the sidelines- this is not a vertical route, it’s a fade to the sidelines. If you like your match ups to the vertical-slant side have the QB look there first. If you’re getting 2 high, the 3 might be wide open.

The double switch is a great concepts against zone coverage. Most teams will play cover 3 or cover 4 or even man under cover 2. This concept will beat all of those coverages. You also have the man to man coverage beaters being ran by the (3) and (6). With this concept, it’s very important that the route stems from the receivers are good. They are all driving their route up field for 8 yards and then breaking their route. You want the corner routes to break right off of the back of the post routes.

To the trips side you have a wheel from (3) which will turn into a natural rub concept because of the inside release from (1) and vertical release from (2). A lot of time the wheel will be open to (3). If you are looking to the two receiver side the (4) will most likely be open. This concept is great against press coverage. If the middle of the field is open the post from (5) could be open or the deep slant from (1) could be open as well. The slant from (1) will break right behind the back of the out from (2).

To the bunch side the concept is pretty much the same as the double post wheel (play above this one). The only difference is instead of the (4) running the wheel, he fakes the wheel then cuts back inside on a slant. Once you beat the defense with the post wheel, hit them with the post slant. If you see defenses switching assignments or rolling over the top fast, call this and gut them. This is a fantastic complement to the post-wheel. As soon as the defensive back turns his hips and runs, the (4) plants his outside foot and breaks on the slant underneath the defender.

This is a great man to man cover and any zone coverage beater. The double posts to the bunch side will attack two high safeties and either the (2) or the (3) underneath will be open. This is called a trail concept because the (3) is running the same routes, just shallower and behind the receivers in front of them. This is your basic high-low concept down the middle of the field. You can see you have three receiver options down the middle- deep post from (1), shallow post from (2), and the slant by (3). To the twins side you have a post-out concept which is great for man to man coverage.

This is the complement to the Bunch Right- Post-Out concept above. Instead of the (4) running the out, he breaks to the out, then turns up field and goes vertical. The bunch side will run their trail concept routes. Once you see the defender aggressively breaking on the out, hit them with the out and up- it’ll probably score. Make sure you have the (4) run the out a couple times before hitting them with the out and up.

The mesh concept is one of the best concepts in all of football. It’s one of the best flag football plays. It will allow your athletes to use the width of the field to beat the defense. You get an over route by the (5) and an under route from the (3). Make sure the (3) and (5) keep their head up and don’t collide. The (3) runs underneath the (5)- make sure they know that. The (1) will go vertical, the (2), and (6) will run a post. The (4) will run a corner route. This will hold the middle safeties- won’t allow them to jump or ‘rob’ any of the crossers. One of the posts will most likely be open as well- most of the time the (2) will be wide open. This is really a 4-vertical concept with a mesh / crossing concept underneath. If you are going to add one of these flag football plays, this should be the one. If you’re seeing zone the shallow crosser should sit in the gap/hole between the zones.

The 4-Vertical Concept is a great cover 3 zone beater. Cover 3 is a fairly common coverage in flag football, so you should probably have this in your playbook. It is also very good against man to man coverage / man free coverage. Our Q progression here is right to left- which could change base on the defense. But we want the Q looking to hit the (2) or (3) up the seam. This will be the easiest throw and there will be a big hole in the zone there as well. If the verticals aren’t there you can throw to the (6) or (3) on the out routes.

The post-corner is a double move that will take advantage of man coverage. The (4) steps vertical for 8 yards, breaks to the post, then breaks back to a corner route. This is a great man to man beater and your best player should be executing this double move. The Whip route by the (3) is also a great man to man beater. The (2)’s vert and the dig from (1) is a great zone coverage beater. The short mesh between (5) and (4) is also great against man coverage. You have three different concepts all built into one play.