Once the playbook is purchased, click the link under Order Details (on checkout page) to download the PDF playbook instantly. 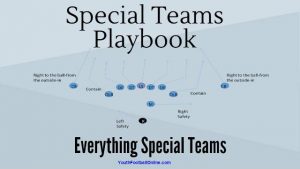 A great way to get some special teams in is before practice. Say you have your kicker, holder, and long snapper are all there early. Instead of letting them run around throwing the ball to each other during practice have them practicing long snapping, holding, and kicking. Kids can practice kickoffs and extra point field goals.  Shoot to get some special teams work in before practice.   Winning the field position battle, creating a turnover, or scoring with your special teams can be the difference between winning and losing.

It is vital that you have a solid special teams playbook. Remember, special teams is game changing, practice it. Have the players kicking, punting, holding, snapping and kicking field goals ever single practice. It will pay off at some point, I guarantee it.  Dominate special teams!