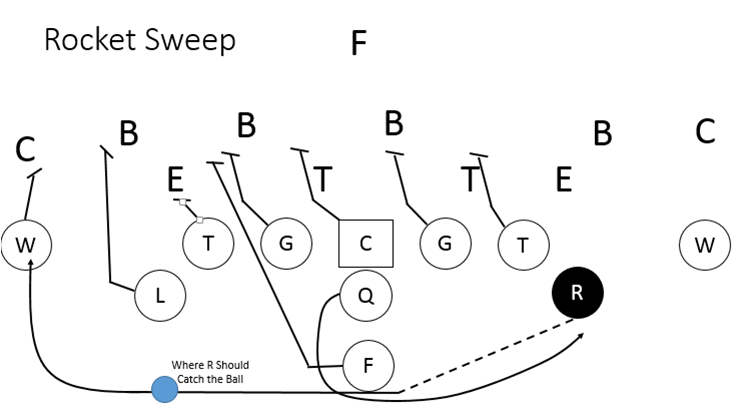 When creating an offensive system it’s important to have multiple series of plays. By developing an offense based around a series the play caller can take advantage of the defense stopping a play. How the defense is stopping one play will open up the next play in the series. One of the great series of plays in offense is the Rocket Sweep Series. This series combines a dangerous outside run with counter and a play action pass. Between these three plays the offense can stress the defense and punish them overplaying any of the three options.

The first play in the rocket sweep series is the Rocket Sweep. The Rocket Sweep is a play that is designed to get the ball on the edge of the defense quickly. The play starts with motion from the R who will go in motion through the F’s heels. Once he gets to the F’s heels he will continue to go directly parallel to the LOS until he gets the ball. It’s important that he is running full speed directly sideways before he gets the ball so that he is catching the pitch outside of the Tackle. Once he does get the ball he will attack downhill and look to get to the edge. The offensive line will be ripping through their outside gap and looking to climb to the linebacker level and attach to a linebacker. They should not focus on blocking any defender that is going opposite of the play, these players will never make a tackle. The L will step directly to his left with his left foot and then arc to any OLB or Safety who is playing the D gap.

The playside receiver will block the Cornerback looking to force him to either side to open up a running lane for R.
Many times when the Rocket Sweep is gaining yards the defense will respond by over adjusting to the motion. This could be a rotation from the safety, a bump from the linebackers or defensive players chasing the motion. No matter how the defense adjusts when they use players to adjust to the motion they open themselves up to a counter coming back the opposite way. The traditional counter for the Rocket Sweep is the Tackle Trap Counter. With the tackle trap the offensive line will be blocking gap, down, backer while leaving the first man outside of the Guard alone. The Tackle will pull and kick this player out.

In the backfield the key element is the speed of the fake. The R must accelerate through the fake so the defense believes he will be getting the ball. The F will replace the Tackle and ensure that no one follows the Tackle on his pull. L will be getting the ball but must be patient so the play has enough time to develop. To buy himself some time he will take the same step with his left foot that he does on Rocket Sweep then he will wait for the F to replace the Tackle and come back down the line to receive an inside handoff from the QB. He must come inside the Tackles trap and hit the play through the A gap and not get wide.

The final play in the Rocket Sweep Series is used to keep the Secondary from jumping the Rocket Sweep. The Rocket Play Action can be a big hitter play that can lead to a quick Touchdown. The R must do a great job with his fake so the defensive Secondary believes he will be getting the ball. The offensive line will use a full slide protection and step opposite of the motion with the F filling in on the play side. The PS WR will run a stalk and go route. He should come off the line slow with a wide base so it looks like he is preparing to block the Cornerback but as soon as the CB drops his hips to tackle R the receiver will accelerate past his outside shoulder, he must stay outside to leave a lane open for the L. L will still take the outside step with his left foot before arcing to the D gap player.

Similar to the PSWR he will look like he is preparing to stalk block the D gap player by having a wide base and coming off slow. He should make eye contact with the D gap player and wait for him to try to rip past him. Once the defender drops his hips to get to the run L will accelerate up the hash. The backside WR will run a go route to keep the CB on his side of the field. If the CB falls asleep or chases the motion this can be a great route to throw for a quick TD. The QB will reverse out, fake the pitch and take a 3 step drop. He should read inside out with the option to throw the check down to the player who originally faked the Rocket.

The Rocket Sweep Series is an excellent series for youth football because it allows your athletes to get the football out in space very quickly. The best aspect of this series is that you only have to block 2-3 defenders to gain positive yardage.