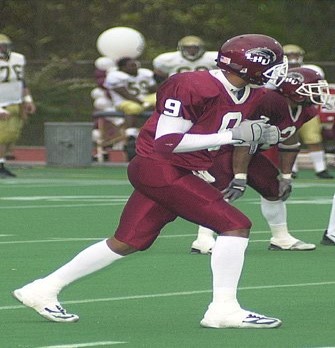 It all starts with a proper stance. A receiver’s ability to explode off of the line of scrimmage depends almost entirely on his stance. In addition, a good stance will also allow a receiver to beat press coverage.

Line up all the players across the field. Have them work on their receiver stance.  Make sure the coaches are fixing any stances that aren’t correct.

A receiver’s job goes beyond running routes and catching passes. A receive must consistently be able to block defenders in space. Many times receivers will be called on to even crack block. We tell our receivers that if they aren’t willing/able to block then they won’t be playing much receiver. Receiver stalk blocking is very important because youth football is very run heavy. There are instances when you can just run off a defender, but most of the time receivers will need to block.

The coach and receivers are 5 yard apart. On the whistle the receiver releases up-field at the coach holding the pad. Once the WR is 2 yards from the CB he must get under control, breakdown and watch the midsection of the receiver. The wide receiver then stalks the CB/coach holding the blocking shield. The receiver must drive his route up the field until the CB realizes it’s run.

You will need several cones. The types of routes you want your receivers to practice will be determined by the route concepts in your playbook. Your players need to be practicing the route that they will have to run in the game. Don’t waste time on routes you will not be using.

This is an excellent drill video that goes through how to run several different routes. It gives good examples of foot work and how to drop the hips and explode into your break.