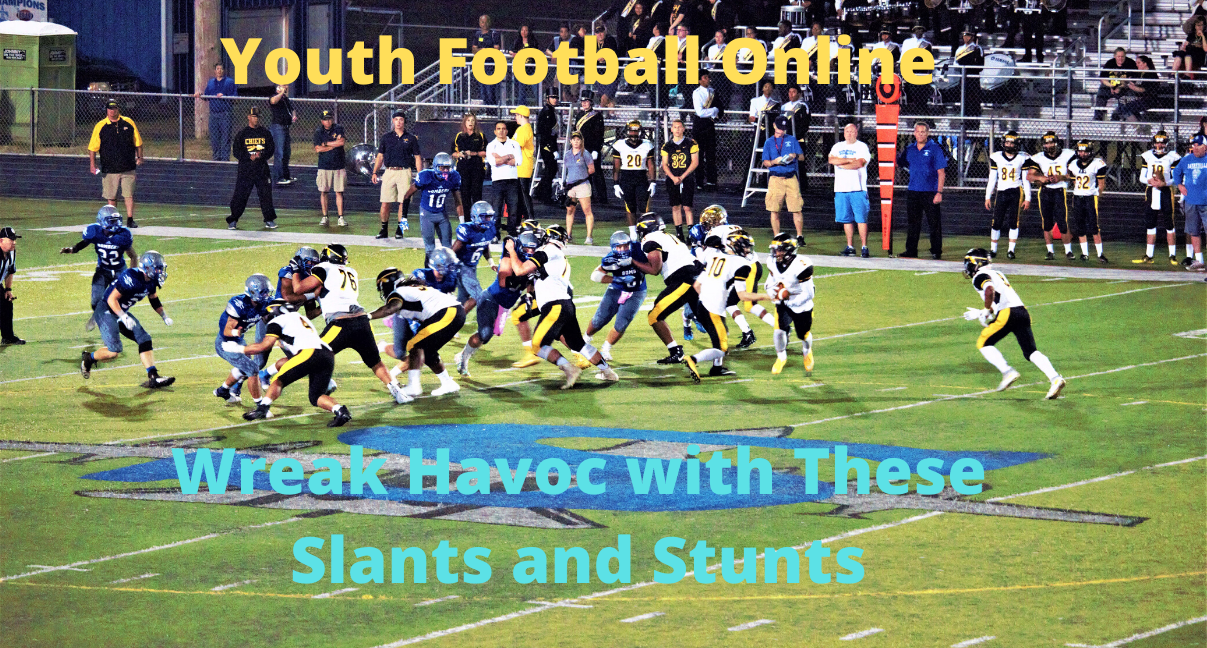 There are several different slants and stunts that can be implemented to generate blocking confusion and put pressure on the offensive line. Below are our favorite ones! Stunts and defensive line slants are not used as much on the youth football level as they should be. Many coaches just tell their defenders to penetrate or to just shoot a gap. This is the man reason why these type of defenses get gutted by great offensive schemes. Here’s a question for you- how often do you have your offensive line practice picking up slants and stunts? Not very much I bet. With that said, Wreak Havoc with These Slants and Stunts:

This is a great stunt that will take away interior and off-tackle plays. The Twist side E will slant B-gap and the S will slant C-gap. This will generate blocking confusion and it will almost always leave your M backer free off of the edge. Against the TE and WB flank I do like to roll the cornerback up to match numbers. I rather roll the CB up because then I do not have to shift my linebackers and / or linemen over to match numbers (this would leave us vulnerable to the twins side). I do like playing cover 2 behind this stunt. If you decide to play cover 2 behind this, make sure your CB keys the TE, if the TE releases he knows it’s a pass and then he can drop into his flat zone. If the CB is on the boundary, he plays more of a hook to curl zone. Also, make sure your CB is tight on the line, on the outside shoulder of the W. He cannot allow himself to get hooked or sealed, as he is the primary force player.  You are somewhat vulnerable to a TE (Y) Quick Pop. However, you can have your S jam the tight-end to throw off the timing if it is a TE Quick Pop.

This is a stunt right out of my playbook. This is one of our best stunts that we use to defend against off-tackle plays. This is a stunt / blitz we love to run to the Tight-end side. Our L is called Leo and our R is called Rip. Leo Storm tells our kids that we are executing this stunt to the left side and with our Leo linebacker. If we call Rip Storm, this would be executed to the right side with our R and W backer. This is an awesome play against ISO and Power. To defend ISO (or lead) you need to pinch your defensive linemen and get the play spilled. One this stunt our L and E are both slanting down one gap. Our E slants B-gap and our L slant C-gap. This is a great way to spill the ISO outside to our looping S and scrapping M. Against Power, the FB will see pre-snap that he is going to kick-out the L, but post snap my L slants, which confuses the FB (this works all the time on the youth level). The L and E will naturally squeeze the down blocks or double teams on Power and get it spilled to out L and M. It’s my go-to answer for off-tackle attacking plays.

See Also: The 3-3 Stack Defense Base Rules and Blitzes

This is a simple Twist that can be executed at all age levels of football. This is a great stunt to defend against off-tackle and sweep plays. It’s a simple gap exchange that the vast majority of youth football offensive lines won’t be able to pick up. Pre-snap, the S shows that he is the contain player. Post-snap, he dips and rips across the OT’s face and into the B-gap. This will create blocking confusion. It’s only a two player movement that creates a ton of blocking issues for the offense. Big return on your investment.

This Razor Stunt is one of my favorite stunts. We run something very similar out of our 3-5 Stack. This is a great stunt that will take away one side of the field. It is great against interior, off-tackle, and edge plays. It’s basically an overload blitz- we’re sending more than the offense can block. This is a blitz I like against compressed offenses. This is also a very deceptive blitz as the M shows that he is going to blitz A-gap (pre-snap), but when the ball is snapped, he is blitzing B-gap (gap exchanging with the T). I highly recommend having this blitz in your playbook. This stunt is great because the backside is still strong if a team runs away from your stunt side. Also, if the offense breaks past your pressure side defenders you will at least still have you cut back defender pursuing to the ball carrier.

Here’s another one of my favorites! This is a great play because you are executing an overload blitz to one side and a twist stunt to the other. You don’t have to run both at the same time, but it’s always fun when you do. This play is sending more than the offense can pick up. I love this blitz against compressed formations. This blitz / twist is a high risk, high reward type play. If for some reason your defenders don’t get there you could give up a big play. I mean who doesn’t like to send the house every so often?!?

See Also: Cross Blitz out of the 6-2 Defense