Waggle Play out of the I Formation

The Waggle Play out of the I Formation is a great play that will allow you to take advantage of overaggressive defenses. This is a play-action passing play off of Power or ISO action. This fullback pass play is a play I saw when I attended a local high school football game this past weekend.  I like this play very much and it definitely can be effective on the youth football level. Toss Sweep Football Play The toss sweep football play is an excellent way to get your athletes the ball out in space. The toss sweep play can be utilized out of almost any formation. I Formation- Toss Play This I formation- toss play is a very simple play to install. The kids should get this play down fairly quickly. The I- Formation Offense

The I-Formation Offense This offense features a tailback-fullback combination in the back field. There is a tight end with a split end and slot back option. 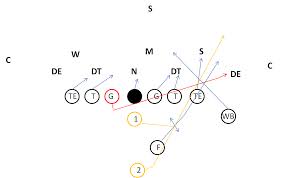 I Formation Power Lead with Kick-out