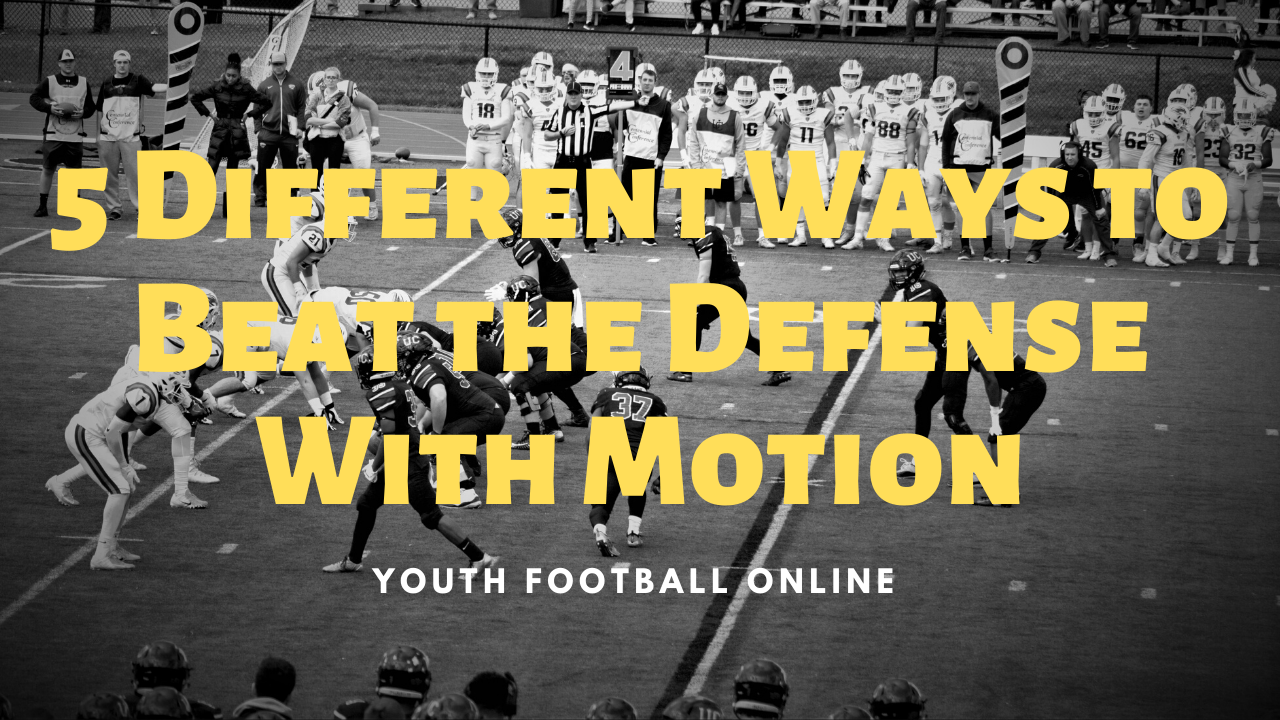 This article will show you 5 different ways to beat the defense with motion. In my opinion, motion is a very underrated and underutilized tactic in youth football. We use motion almost every single play- I would say maybe 60-70% of the time. There are several different kinds of motions. There is Jet & Rocket motion that stretch the defense out horizontally. There is orbit & fly motions and there are also short motions and what we call three step motions. When you motion a player across the formation it forces the defense to adjust or they will get out flanked or they will become outnumbered to the motion side. Defending, aligning, and adjusting or rolling to the motion is something very few youth football teams practice.

5 Different Ways to Beat the Defense With Motion

In my opinion, Jet Sweep is the best play in all of youth football. It’s a play we built our entire offense around. The great thing about Jet and Rocket Sweep is that you only have to block 2-3 defenders in order to gain big time yardage. It will force the defense to adjust or they will get beat on the edge very quickly. Jet and Rocket Motion are full speed motions that will allow you to get your athletes the ball in space very quickly. If you are team that isn’t blessed with speed, adding Jet Sweep is a must. You must be able to attack all areas of the field and Jet Sweep will allow your running backs to be fast outside, even if the aren’t that fast. If you are a team that has speed, Jet Sweep is a complete nightmare to defend and your athletes will score a lot of points.

We love to run Jet Sweep out of our Tackle-Over Formation. This will give use more blockers at the point of attack and it usually causes defensive misalignment. We will have our Split-end crack the outside backer and the play-side WB (4) will seal the defensive end. We will off-set our fullback (2) and have him lead block- look to block the cornerback. You can easily run Jet Sweep out of the gun as well. It’s a great play out of spread formations as well. Below is a link to our Tackle-Over Jet Wing T Video Playbook (includes whiteboard breakdown and game footage).

Rocket Sweep allows you to get your athletes the football in space very quickly. It stretches the defense out horizontally even more so than Jet Sweep. In addition, the complementary plays off of Rocket Sweep (like counter and trap) are lights out. I usually install our Rocket Series when I coach the older age levels of youth football.

Motion adds an element of deception to your offense as well. When a player goes in motion, all the defender’s eyes will be on him. What we love to do is to establish Jet and Rocket Sweep, then we love coming underneath the motion with Belly, Trap, and / or Wedge. Another great play off of Jet Sweep is the Jet Reverse. On the Jet Reverse, your QB hands to the motion player and then the motion player hands to the receiver coming the other way. Just sending a player in motion and running a play off of it will usually work. I like the wedge play out of the Double Wing. The WB comes in motion (short motion) which will draw eyes and make the defense think it’s Power, then the QB keeps it (Q Wedge) or he hands to the FB (Fullback Wedge) on the wedge. Take a look at how our Belly and Wedge hit big off of Jet Sweep action.

You can see how the rocket motion influences the defenders to widen which allows us to come right underneath the motion for big yardage. If teams want to stop Jet and Rocket Sweep they have to commit defenders to defending it. Once they do that they open themselves up for complementary plays like Down & Belly.

Wedge off of Jet Sweep

Many times defenses will not adjust to the motion on the youth football level. How many of you guys actually practice adjusting your defense to the motion? Not many I bet. When you motion a player across the formation and the defense doesn’t account for that player, you will create an extra gap and/or have an extra blocker at the point of attack. Motioning a player across will allow you to flip the strength of the formation. This is something I like to do out of the Double TE formations. See below.

Pre-snap you see the strength of the formation is to the left (defense’s right). If the defense doesn’t shift, you can run that way all day because you have the extra blocker. If you motion the WB across you will flip the strength of the formation. I like to motion the WB across and have him ISO block the outside linebacker because most of the time the defense doesn’t shift.

You can motion a player across the formation and have him execute a kick-out block. This is great against defenses that are playing wide defensive ends. You can motion a player across which will give him a nice kick-out angle and it will allow you to free up another blocker to work onto the second level. Here’s a play we like out of the I Formation:

This is a play I call Power Z-kick. This isn’t your traditional Power concept but it is similar. Traditionally, on Power the Fullback will kick out the defensive end and the backside G will pull and lead. Here we motion our Z across and have him kick-out the DE. This will give us more blocking options with our Y. You can have the Y get right onto the S (outside backer) or you can have him double team the DT and have the Fullback ISO the S. If the defensive end squeezes, just have the Z log the DE and the ball will spill. Remember, the motion player cannot go or lean forward until the ball is snapped. Sometimes kids will go forward too early resulting in a penalty.

There are several different ways you can utilize your motion player in the passing game. As I said several times, if the defense doesn’t adjust to the motion then you have an extra player at the point of attack. If the defense is playing man coverage and the defender that is responsible for the motion player doesn’t run across with him, your player will be wide open. We love to run a play we call Jet Speed Out. We motion our player across the field and send him right into the flat. This isn’t my team but a team that I scouted that runs the same thing, see video below.

The offense comes out in 3×2 here and motions the #2 receiver across making it a 4×1 look and the defense doesn’t adjust. If they are playing man coverage the defend should run across with him (he doesn’t here). If they are playing zone coverage they need to bump over to account for the extra receiving threat. This is almost too easy. As I said earlier, very few youth football coaches teach their defenders how to handle motion.

As you see here the defense doesn’t account for the motion player, which leaves him wide open. Again, it’s almost too easy. This play is gives the QB a high to low read. We always want to look to hit the deep route first (TE on the Corner). Many times the CB will come up to the 3 which will leave your TE open. If the CB is keying the TE and runs with him the 3 will be open. Motioning at the CB will put him in conflict, a lose-lose conflict. If the safety flies over the top the SE could be wide open on the post.

Utilize motion! It’s a very underutilized tactic on the youth football level. This means many teams will be surprised and not know how to handle (adjust to) the motion. These plays can be executed out of pretty much any formation.