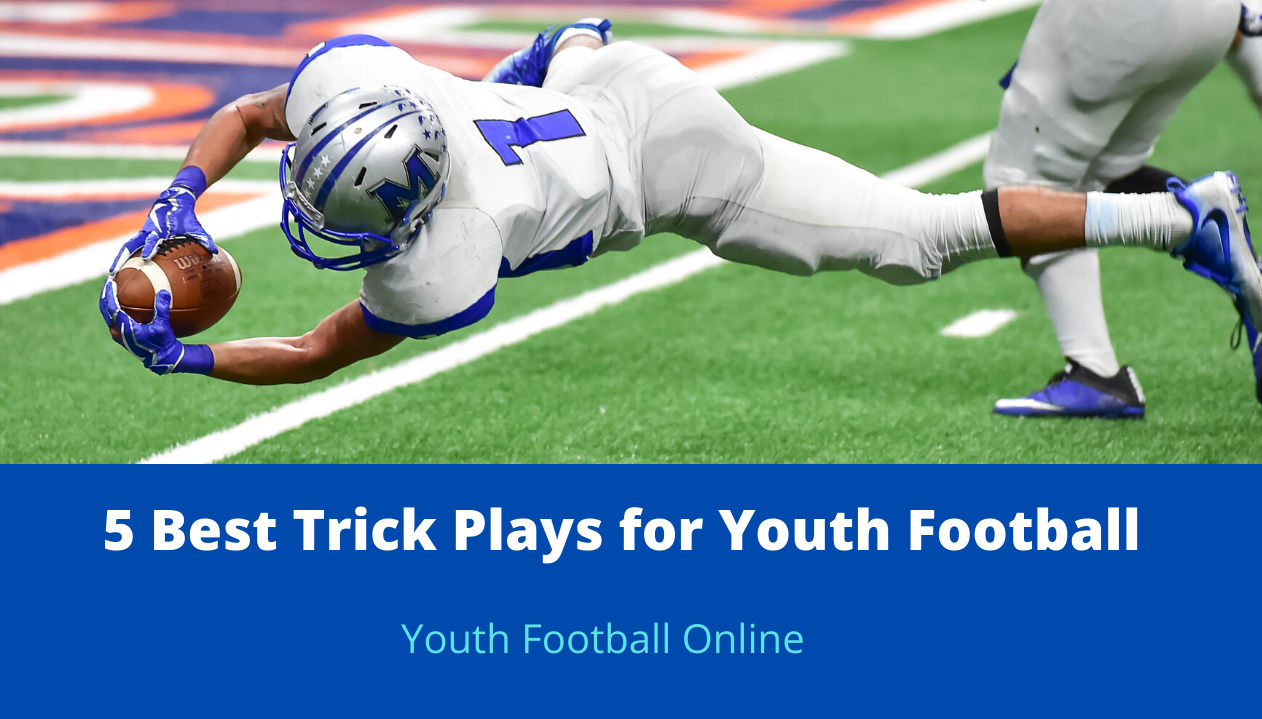 Here are the 5 Best Trick Plays for Youth Football

I had to start off with everyone’s favorite trick play- the Halfback Pass! This is a play that works on all ages levels of football- from the pros all the way down to youth football. This play is easy to install and it is a big hitter if you call this on a run down and distance. You can see here that the kid does an excellent job of selling the run fake then passing the ball to the receiver. This play is also great because if the receiver isn’t open the HB can just run the football.

The Hook and Ladder is another classic! This one is a little more difficult to execute, but it can be done if practice time is committed to it. This is a great play for when teams are playing off coverage. When defenses sit back you can call this play. A lot of times the cornerbacks will play off coverage on long down and distances and when they drive on the hook route, they won’t even notice the RB coming out of the backfield for the pitch. It’s a very deceptive play that almost always works (if executed properly). With that said, you do need a good throw, good route, good catch and a good pitch in order to have success with this play. You do have to commit practice time to this play.

Many coaches won’t consider this a trick play. However, if you can execute this on the youth football level, I consider it a trick play! This play is essentially triple option, with the first pitch option coming underneath the QB, rather than outside. This inside shovel is a replacement for the dive.  The off-set Tailback (T) is the outside pitch back that needs to do a good job expanding wide. When he expands wide, the defense will too. The play-side defensive end is the read for the QB. If the DE sits on the QB, the Q pitches it to the T. If he comes up field to play the QB he pitches it underneath on the shovel option (H). This play isn’t as hard as you think to install. It’s a play that isn’t very common on the youth football so if you are able to pull this off, it will hit big.

The Reverse Pass is a great trick play that will almost always work. Many times the defense won’t account for the QB in the passing game after he pitches or tosses the football to someone else. This is one of the more simpler trick plays that you can install, which is why it is great for youth football. This doesn’t require a lot of practice time- it’s a very inexpensive play. Make sure you run the reverse once or twice before calling this. Have a coach watch the defense and see when the DE and CB are selling out to defend the reverse. Again, set this play up before you run it.

For the final trick play, I decided to share a video I found on YouTube that had all of Boise State’s trick plays from a couple of years ago. All of these plays featured in this video are awesome and I feel can be executed on the youth football level. My favorite is the Statue of Liberty Play! How freaking awesome was that Statue of Liberty Play!?! One of the best games I’ve watched was the Boise State vs. Oklahoma Fiesta Bowl. I remember that game vividly, it was one of the sickest games I’ve ever seen.

In my opinion these are the 5 best trick plays for youth football. I believe it’s important to have at least 1 or 2 trick plays in your playbook. There will be times in a game where you need a big play and will have to open up the playbook and go with a trick play. So make sure you have a few to keep in your back pocket. Be sure to practice the heck out them as well. I recommend that you have a trick play off of your best run and or best pass play. For example, say you are a team that runs a lot off Tosses, maybe install the Toss Pass. You should always have complements to your base plays.