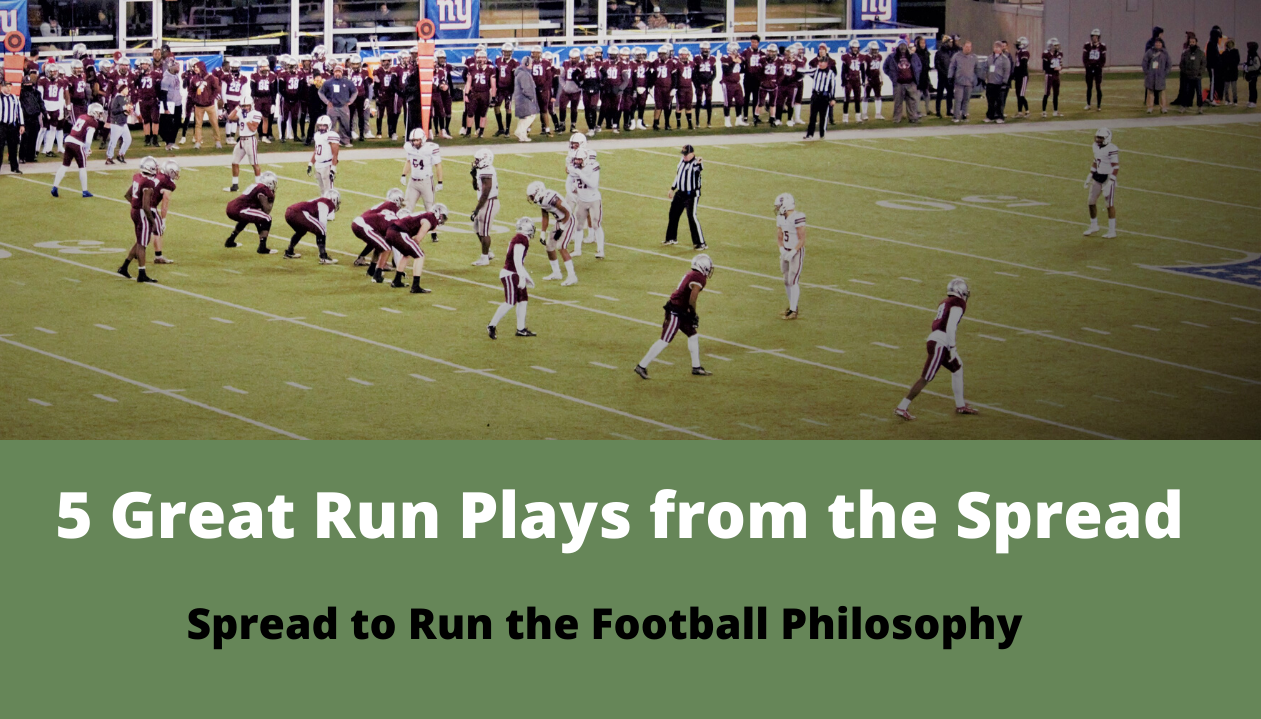 The whole idea of spread the field to run the football is based around this simple idea: if the defense spreads out with your formation, you kill them inside. If they load up inside you go outside and attack the perimeter.  It’s really that simple. It’s a numbers game, go where you have the blocking leverage and numbers advantage. People have the misconception that spread teams can’t be physical. These spread to run plays are very physical! Here are 5 great run plays from the spread offense.

Power is a concept that can be executed out of any formation. When your typical youth football coach thinks spread, they usually don’t think about running Power. When you spread the field you will open up running lanes inside. I like Power out of 20 Personnel because it spreads the field while still allowing you to have blocking numbers inside with the H-back. If the defense doesn’t respect the twin receiver side you can have the Q (1) just turn and throw the Bubble Screen to the (Z).

QB Power out of 20 Personnel is very difficult to defend. I like how they spread the field and then run inside. #coaching #spreadoffense #footballplays #coachinglife

Spreading the field and running ISO with your QB is a great way to create some natural running lanes inside. Going 2×2 will force the defense to spread out and it gives you 7 vs. 6 box defenders (6 blockers vs. 6 defenders when the Q is the runner). If the defense doesn’t respect the twins you can just have the Q catch the snap and throw the bubble to the (Z). So this is really two plays built into one. When you have a mobile QB this is a play that I highly recommend running. If you do not have a mobile QB, you can just put in a running back and treat it like a direct snap.

ISO blocking is very simple, offensive linemen block big on big and you isolate the play-side linebacker (W). The (2) will lead block and ISO the (W). You can also leave the backside defensive end unblocked and have the offensive tackle (LT) work to the second level. It doesn’t get much simpler than this play. This is true smash mouth football- you don’t have to come out in double tight ends to be a physical ‘smash mouth’ offense.

Running Inside Zone out of 2×2 is a great way to spread the field and force the defense to defend the entire width of the field. If you have a mobile QB you can implement the Inside Zone Read. The Read aspect of the play will have the QB read the backside defensive end. If he squeezes, the Q pulls the ball and runs. If the DE sits or plays the QB, the QB hands off to the (T) on the Inside Zone. I have the backside (Z) running a Stick and the front side (S) running a Bubble. So if you want to implement a Stick or Bubble RPO you can.

The offensive line blocks basic inside zone rules: step play-side gap, then combo off onto a linebacker. Inside Zone blocking is simple and it will allow you to get some double teams on the play-side. There are several different RPO Tags that can be installed as well. You can build an entire offense around the Inside Zone.

Playbook: Inside and Outside Zone Playbook for Youth Football

The Jet Sweep is a one of the best plays in football. It’s a great way to get your athletes the football in space very quickly. Also, you only really have to block 2-3 defenders in order to get big time yardage. Jet Sweep can be executed out of pretty much any formation. It’s great out of the spread because it can literally hit anywhere outside of the play-side tackle. It will create natural running lanes and vertical seams outside. Jet Sweep will allow you to stretch the defense horizontally, forcing the defense to defend the entire width of the field. I’ve said it before, I’ll say it again, Jet Sweep is one of the best plays in football!

The play-side offensive line steps play-side and if there is no defender to reach, they work to a linebacker. The backside, steps play-side and looks to cutoff any backside pursuing defenders. When I say cutoff, that doesn’t mean ‘cut’ blocking. Also, the motion player cannot go or lean forward until the football is snapped.

GT Counter out of 3×1 (Trio Formation)

The GT Counter play is a great play because it gives you deception and also numbers at the point of attack. This is a great gap scheme that will allow you to utilize blocking angles and/or double teams at the point of attack. The pulling guard (blue) has an excellent angle for the kick-out (kicking out DE or first defender outside the Y) and the pulling tackle (red) wraps for the play-side linebacker. I like running this out of trips because it forces the defense to spread out, taking numbers out of the box.

I also like running GT Counter out of 2×2 and with jet motion. Faking Jet Sweep will force the defense to overflow to the motion side, ultimately taking themselves right out of the play. This Counter play pairs well with the Jet Sweep play talked about above. Having a player fake Jet Sweep will add even more deception to the play. Come out and run Jet and then hit them with GT Counter!

Spreading the field to run the football is a great way to create natural running lanes. Spread formations will force the defense to defend the entire width of the field. This will help create natural running lanes across the field. If you have a mobile QB this spread to run philosophy will take your offense to a whole new level. Spreading the field is great because if they decide to not respect your split out receivers you can beat them with different types of quick screens.