The Pistol Offense Playbook for Youth Football is a balanced playbook. The Pistol Formation is somewhat of a hybrid formation that utilizes strengths from both Shotgun and Double Wing/slot Formations. The double slots will create alignment conflict for the defense. These slots are utilized in several different ways in this playbook (run game, pass game, and blocking).  Putting the QB in the Pistol will allows you to utilize his athleticism. The pistol formation will also give your QB more time to throw the football. It will also allow the QB to see the field much easier. You will also get better fakes and angles to attack the defense out of the pistol. The Pistol will also help if your offensive line isn’t very good. This playbook is very easy to install and it works very well in youth football.

This playbook includes everything you need to install the offense. This playbook has plays that attack the interior, off-tackle, and edge of the defense. It also has a very explosive play-action passing attack. This playbook is very diverse as it features several different plays. This playbook features two formations: ‘Slots’ and ‘King’. This offense is very simple and it will allow your players to play fast and really dominate within the scheme of the system. 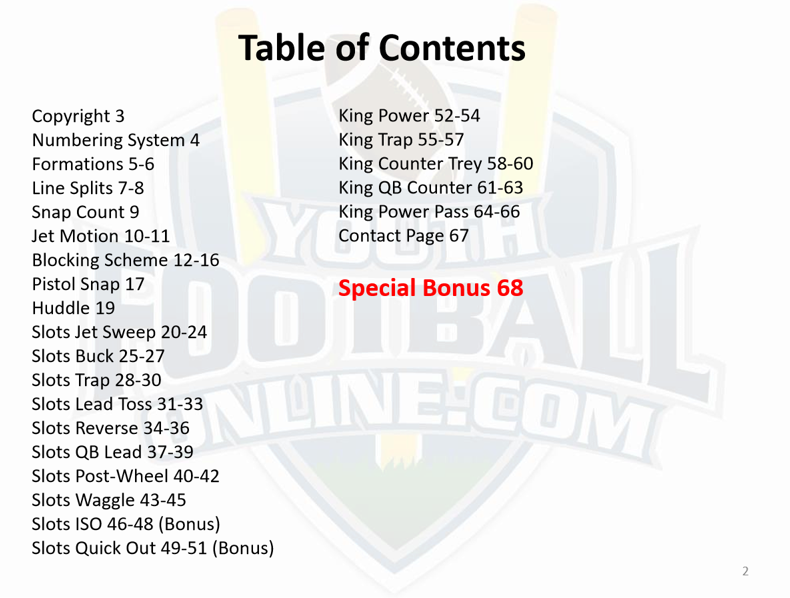 This playbook includes: simple hole and position numbering system, formation breakdown and line splits, snap count, jet motion timing/coaching points, blocking schemes, play diagrams vs. various defenses, and player placement.  This playbook is a schematic attack that attacks all areas of the defense. This playbook features colored diagrams that can be printed out and given to players and coaches.

There are no reviews yet.