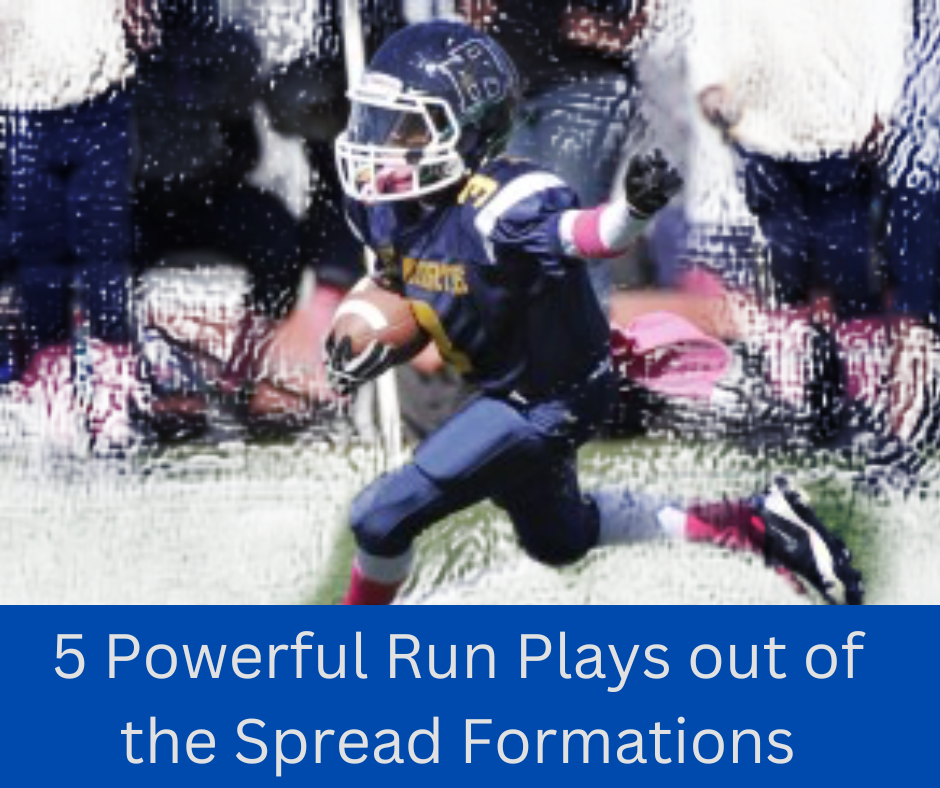 When you tell a youth football coach you run ‘spread’ they automatically think you’re all about throwing the football. Just because you spread the field doesn’t mean you can’t have a physical run game. Spreading the field is just a way to align to defense out horizontally- this will create natural running lanes inside. It will also force the defense to have to defend the entire width of the field. With the spread offense you can also implement mobile QB plays and utilize perimeter screens that will get your athletes the ball in space. I want to make it clear that my teams will always be a Wing T and Beast / Direct snap team. We are a team that will almost always have a TE on the field. With all that said, we have implemented some spread formations and it has help us tremendously. We still run our core Wing T plays but now out of a spread formation as well. Here are 5 Powerful Run Plays out of Spread Formations.

RG: Pull, lead through the hole.

LG: Pull, kick-out contain player. Aiming point is the inside hip of the defender he is kicking out. Tight pull path behind down blocks.

Buck is one of the best plays in football. It’s great because it works down blocking with a kick-out at the point of attack. It will allow your kids to utilize great blocking angles.

Power out of 20 Personnel

Power is a play that is ran with great success on all levels of football. Power out of a spread formation will help lighten up the box. You can also run an RPO- Power/Now Screen. If the defense doesn’t respect the twins side of the formation you have the kids run power, but just have the Q throw the Now to the (S). If they don’t match 2 defenders to your two receivers you can throw the Now Screen all day and gain yards because you will have the numbers advantage. Be sure to check out our 20 Personnel Playbook.

RT: Base block defensive tackle, turn him inside if possible.

Q: Catch snap, get behind T’s cut off of his lead block.

The ISO play is probably the most common play utilized on the youth football level. It’s great because it’s easy to implement. It utilizes base blocking with a lead blocker. There’s no pulling or crazy blocking rules. I love QB ISO because you’ll get that extra blocker at the point of attack. If you don’t have a mobile QB, put in a running back and snap to him. This video isn’t of ISO, but it’s a sick passing play off of QB ISO.

LG: Pull, lead through the hole.

H: Kick-out defensive end. The H can cheat his split in to create a better angle for himself.

The QB Power out of 3×1 is very difficult to defend. It spreads the defense out, which will create space/ natural running lanes inside. The push motion is great because it will pull another defender out of the box and will draw defender eyes. If the defense doesn’t match the push motion (T) you can have the QB catch the snap and throw to him. If they don’t match the motion you’ll have 3 over 2 number advantage. Plus, getting athletes in space is never a bad idea. Check out the video below. It’s a video of this exact play.

RG: Pull, kick-out defensive end. Aiming point is the inside hip of the defender.

Q: Catch snap, handoff to the (T), carryout fake to the right. A good fake is needed.

The GT Counter is a great play because it utilizes down blocks and it gets multiple players blocking at the point of attack- in addition to the deception element of the play. Spread the field and run the football. Below is an excellent article regarding the GT Counter. These 5 Powerful Run Plays out of the Spread Formations are all fairly easy to install and will work on all age levels of youth football.