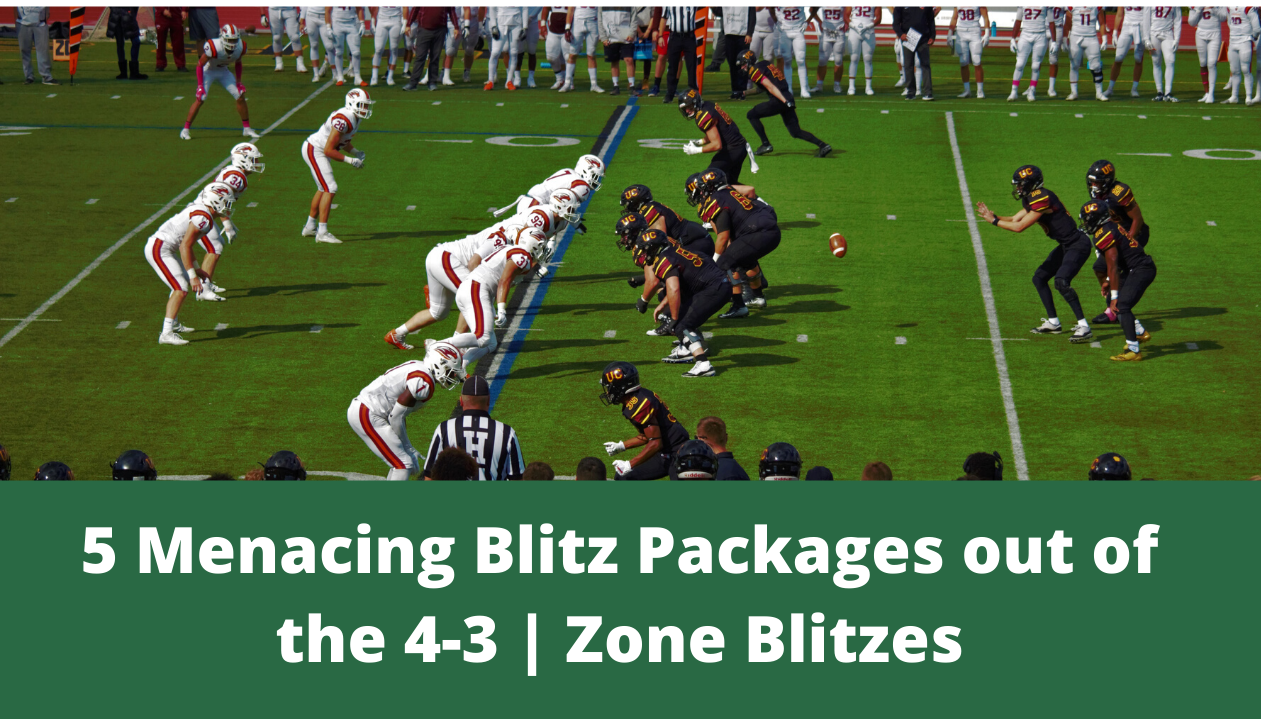 Zone blitzing is something that I feel isn’t utilized very much on the youth football level. It’s a very underrated and under-utilized coverage/ blitz scheme. Zone blitzes allow you to be multiple and it will add an element of deception. There are several different combination blitzes and stunts that you can attack the offense with. You can bring multiple linebackers, drop defensive ends in coverage, play multiple different zone coverages behind the blitz, and you can twist defensive linemen within the zone blitz. The combinations are endless. Ask yourself this- how many offenses practice picking up stunts and practice blitz recognition during the practice week? How many times a season do you think offenses have to deal with different zone blitzes and stunts- not very often. With all that said, attack the offense with something they won’t be ready for- here are 5 menacing blitz packages out of the 4-3 Defense.

5 Menacing Blitz Packages out of the 4-3 Defense

The bottom line is that zone blitzing allows your defense to apply pressure in the run and pass game without having to play man coverage.  A major part of a successful zone blitz is disguise. Be sure to commit practice time to disguising your coverages and blitzes. We coach our defenders up on not giving away where they are blitzing or stunting to. We want youth football offensive linemen to have to reaction post-snap, which is very difficult for a youth player to do. When you attack the defense with multiple stunts, slants and blitzes it will keeps the offensive linemen on their heels and keeps them guessing. It will also slow down their fire out because they don’t know who is going to come from where. Cover 3 is played behind all of these blitzes. All these blitz complement each other very nicely.

Disclaimer! I prefer to draw my defense on the top! So take it easy on me.

This is a very simple blitz we like to run to the 3-man surface (Guard-Tackle-Tight-end side). This is a simple blitz that works very well against off-tackle plays like ISO and Power. This is a simple blitz that works well against gap or zone blocking schemes. It’s a basic gap blitz that sends a defender through each gap. Sometimes I do like to send the M through the A-gap as well, making this blitz an overload blitz.  The T will have B-gap, the DE will have D-gap (contain), and the S will have the C-gap. Again, this is a very simple blitz that is inexpensive (doesn’t require a lot of practice time) for the defense, but it is very difficult for the offense to pick up. You will almost always have a free rusher on this blitz. The CBs play deep 3rd coverage and the SS rolls down to play curl to flat. The FS rolls to the middle of the field and plays the deep middle 3rd. The W has hook zone, then works to curl.

This blitz is just like the Sam Linebacker blitz. The only difference is that the M is blitzing the and S is dripping into zone coverage when he reads pass. The M is blitzing A-gap , the T has B-gap and the DE contains. The (S)’s run fit is C-gap. The Cornerbacks will have deep 3rd coverage and the SS will roll to the middle 3rd. The FS will roll down and play curl to flat. The W will have the hook zone. The N will play A-gap, the T will have B-gap and both DEs will have contain.

This is one of my favorite blitzes to run to the 2-man surface (Guard and Tackle side). This is a simple gap-exchange pressure that has the DE slant to B-gap and the W loop around to the C-gap and he becomes the contain player. Pre-snap it will look like the DE is coming off of the edge again, but post-snap he slants across the face of the RT and slants B-gap. The W will almost always have a free run into the backfield on this. The N will have A-gap, the T will have B-gap, and the backside DE will have contain. The FS will roll down and play the curl to flat zone. The M will play the ‘hole’ in the middle of the field- basically the QB roll-out side hook zone. Both CBs will play deep 3rd coverage and the SS will roll and play deep middle.

This Twist Stunt is one of my favorite stunts that I like to use to the 3-man surface. The DE will slant down- dip and rip across the face of the LT and attack the B-gap. The T will then cross behind the DE and attack the C-gap. The S will blitz off of the edge. It’s executed the same way the  Sam Line backer Gap Blitz, but the stunt side players are just switching up which gap they are responsible for. The N will have A-gap and the backside DE will have contain. The W will have B-gap on run and hook to curl zone on pass. The M will have the QB roll out / open side hook zone. On run the M will have A-gap. The Cornerbacks will have the deep 3rds. The SS will roll down and play curl to flat and the FS will roll back and take deep middle.

This is a blitz we call “Uptown”. Uptown tells the defensive linemen that they are slanting one gap outside. The T will dip and rip and slant B-gap. The DE will rush off of the edge and is responsible for contain. The S will blitz A-gap. Pre-snap he will show that he is going to blitz B-gap and then post snap he’ll attack A-gap. The N will have A-gap and the backside DE will have contain. The W will play curl to flat zone. He must wall off any inside routes from the S or X (maintain inside leverage). The SS will roll down and play curl to flat and wall off any inside routes from the Y or Z.  The FS will roll to the middle of the field and have deep middle. CBs will play deep 3rd coverage. The M will play the hook zone to the side the QB rolls out / opens to.

These 5 Menacing Blitz Packages out of the 4-3 Defense are easy to install and they complement each other very nicely. Playing zone behind blitzes is a great alternative to man to man coverage. Cover 3 is played behind all of these blitzes. However, you can easily execute any type of zone coverage behind these blitzes. You can keep both safeties back and play cover 4 or cover 2. The coverage and blitzing options are endless.