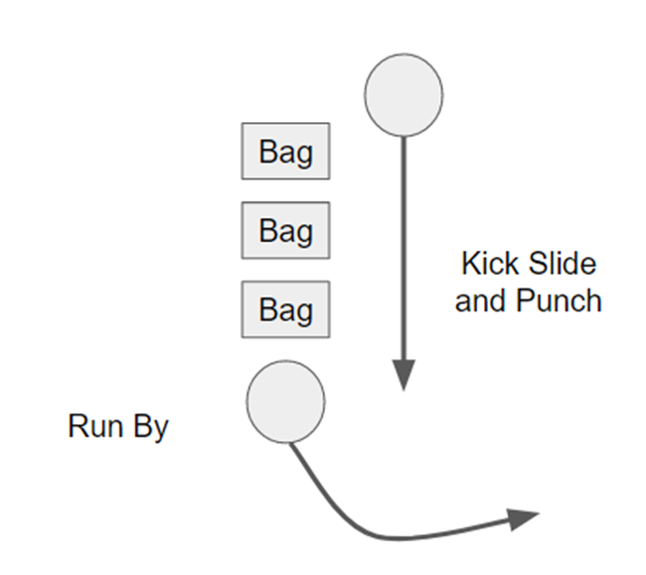 The Set and Punch Drill is a great tool to get offensive linemen efficient practice on their pass protection. The drill is designed to work on the footwork, punch and finish of the pass sets. As an added bonus it can be adapted to fit any team’s pass protection scheme.

The basic set up the drill is very simple. One lineman will get in a stance while three bag holders and a fourth linemen will line up outside of him. On the coaches cadence the lineman will take a drop step and punch the first bag and then continue down the line to punch the remaining bags. As he punches the third bag the fourth lineman, who does not have a bag, will start attacking outside of him to simulate a defensive end trying to run the hoop to get to the Quarterback. The lineman who is going will push him further than he wants to go to protect the pocket.

There are a few key coaching points that the coach must keep an eye on while the lineman is doing the drill. The first is that the player is keeping a good posture and keeping his hips low and chest up. As the practice goes on linemen begin to lose their posture and start allowing their knees to get more straight and begin to bend at the hip. This puts them in a position where they lack power, can’t see the defender, and have a shorter punch: so it’s critical that the coach stays on them to keep their posture throughout the drill.

The next coaching point involves the weight of the lineman’s feet. As he goes through the drill it’s critical that he has the majority of the weight on the front foot and isn’t allowing his weight to shift back to his kick foot. If he gets into a position where his weight is sitting on his back foot defenders will be able to beat him to the inside and get a more direct line to the quarterback.

The final coaching point is on the run by portion of the drill. Many times defenders will take a wide path to get to the Quarterback. Where linemen can get in trouble is if they set too far outside and open up space for the defender to beat them inside. When a defender takes a path that is too wide all the lineman needs to do is take a vertical set and flatten the defender’s path so it takes him further away from the Quarterback. This will leave space for the Quarterback to sit in a clean pocket and make the throw downfield.

One of the best parts of this drill is the efficiency. When it is running properly there should be only about 5 seconds between the end of one rep and the start of the next one. This, combined with the technical aspects of the drill, make it a great drill to work in the pre-practice section as players begin to warm up.