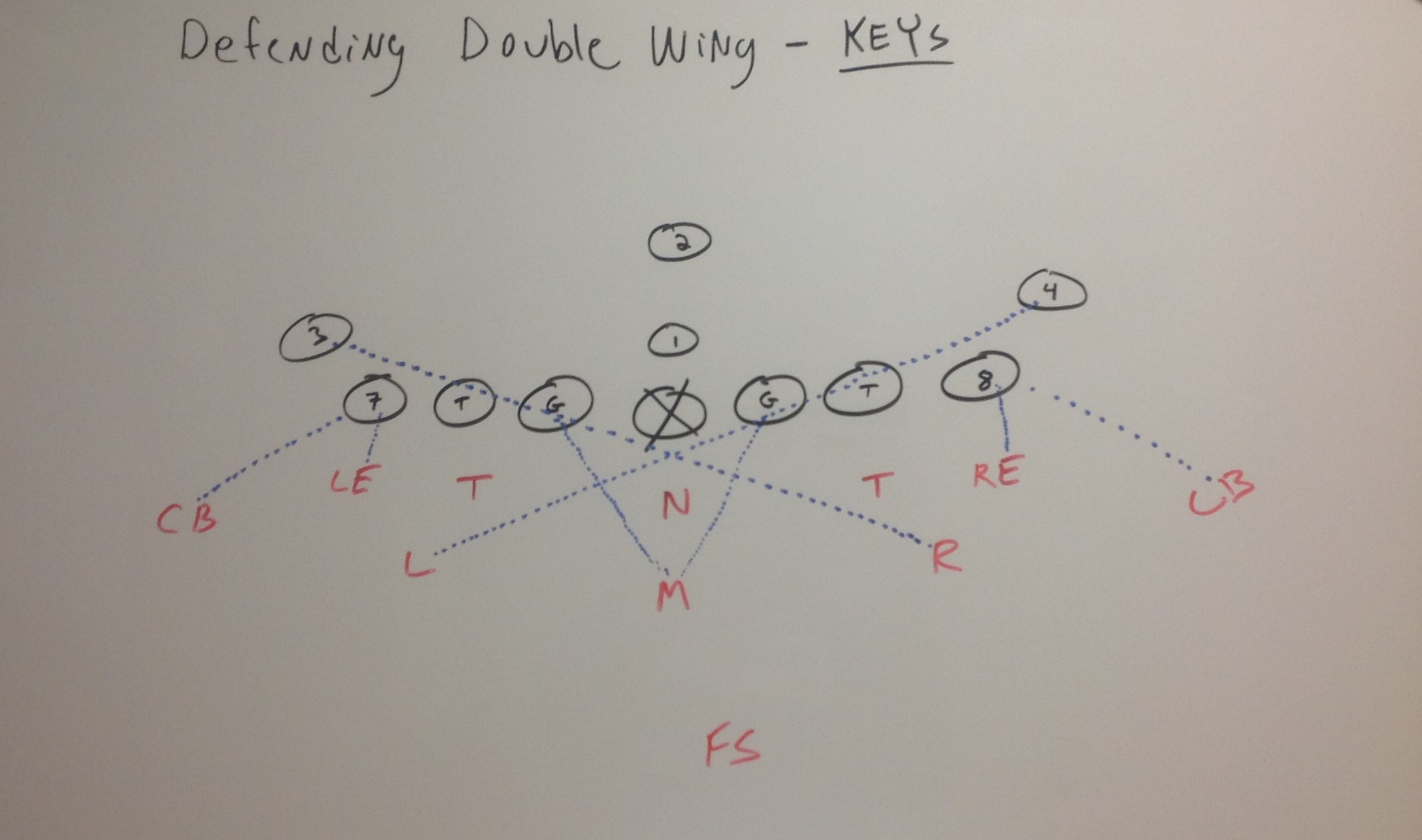 Personally, I like the Double Wing Offense. My Wing T Offense is very similar to the Double Wing. I absolutely love the wedge, power, and counter play out of the Double Wing. I love the down blocks and the kick-out at the point of attack. Every season we play a real good Double Wing team. They run power, wedge, counter, and waggle very well. They are always difficult to slow down. They down block, but they also love to utilize double teams at the point of attack.  The past two seasons we’ve done a good job against their offense.  Here is how we did it.

The 6 Keys to Victory against the Double Wing Offense

In any football game the team that wins the line of scrimmage will win the game, regardless of what offense you are playing. So our # 1 concern is controlling the line of scrimmage. Our defensive line must watch the ball and hold their gaps. D-line must keep a low pad level while getting a good launch so that offensive line doesn’t get a good push. Low pad level is critical, especially against the double wing and their double teams. If your players are getting driven back by the double team you need to have them cut the linemen down. If they are getting washed on a down block, they need to spin off. The offense will either use double teams or down blocking at the point of attack. It is important that all your defensive linemen holds gaps, squeeze down and spill the play outside.

Also, use your cornerbacks! Roll them up and play cover 2 (good mix up). The play action game in the double wing offense is lights out. You need to have your secondary players read Tight-end and Wing-back. If it is a pass, they will release into their pattern when the ball is snapped so it is an easy read. Usually the play-action pass play is a bunch of receivers flooding an area, high-low route concepts.

Don’t make the mistake of putting all your defenders on the line of scrimmage. We like the 5-3 vs. the double wing because it gives us 5 down linemen and 3 linebackers able to get downhill and pursue the ball carrier. When teams throw 6, 7, or even 8 defenders on the line of scrimmage they will give up big plays. Against 6 or 8 man fronts, if the running back gets through the first level of 6-8 defenders, there will be no one left to pursuit the football.

Nose Guard 0 Tech (head up on Center): Nose forces motion side A gap. If nose gets double teamed, he must cut down the double team. A solid cut of the double team will cause a pile up (the nose guard gets doubled nearly every play- practice proper cut down & work a rotation of players). We have our (N) cut a lot because of wedge.

Defensive-Tackles 4 Tech (head up on O-Tackle): If offensive linemen (tackle and guard) pull away, D-Tackles must force pursue gap and squeeze down hard keeping a low pad level. If the Offensive line double teams the D-Tackle; DT must cut down the double team, causing pile up (practice a good cut down, & a rotation of players). If DTs don’t squeeze, they will leave cut back lanes.

Defensive Ends 8 Tech (head up on Tight End): D-Ends squeeze on the TE’s outside shoulder & close gap if the TE blocks down or pulls away (very important to squeeze down to close gap). If TE & Wing Back both block down, DE must close down & take on the kick out block attempt by the fullback.  DE’s must squeeze and take on kick out by the fullback (or guard in some cases).

Teach your DEs: If the TE blocks down, someone is coming to kick you out. You don’t want them getting too far into the backfield. They must squeeze and stay flat on the line of scrimmage.  It’s important that they get their hands on the TE. This will not allow the TE to work down on the DT or linebacker.  DEs have C-gap- it’s important that they do not get washed inside (squeeze, then hold c-gap).

Left Outside linebacker (R) (D gap): Cross key! Key’s the opposite wing back (4). If (4) blocks forward, OLB forces hard to backside pursuit lane. If (4) steps backwards (for counter), or motions towards the (L), (L) must force assigned D gap hard! Pass read,  flat zone, hook if it’s short side of field. It is imperative that they follow their keys and not get caught peeking in the backfield at the misdirection.

Middle linebacker (A gap): Must key motion side guard. Guards will take you to the ball, they pull almost every play. Middle backer must force hard to a-b gap to pull side, if they do not pull then its wedge or QB waggle/ Rollout (pass play). Pass read; QB roll-out.

Right Outside linebacker (L) (D gap): Cross key! Key is the wing-back (3). If the (3) blocks forward, (R) forces hard to backside pursuit lane. If the (3) wing-back steps backwards, or motions towards the (R), (R) must force assigned D gap hard! Pass read; flat zone, hook if it’s short side of field. It is imperative that they follow their keys and not get caught peeking in the backfield at the misdirection.

Linebackers must read keys and react quickly. This is critical because with those close splits it allows the offense to get blockers to the point of attack real fast.  This is a key friendly offense. Follow the keys they will take you to the ball!  There aren’t many key breakers or false keys on the youth football level.

Corner Backs: Contain play, always turn play inside. Both corners key tight end to wing back. If wing-back goes away in motion, they then key the tight end. If both wing-back and tight end block then corner must force contain for run support. If the tight-end or wing-back release corner drops back into assigned zone (3rd or flat defending on call). You can play man to man as well.

Safety: Stays deep reading for waggle pass. Free safety must stay deep to eliminate any big plays. Deep 3rd, nothing gets behind the safety. You can also play cover 2 so that you can have two safeties deep. You can have him key the guards. If he doesn’t see any linemen pull, than it may be a pass. We usually just have be a true FS and sit deep.