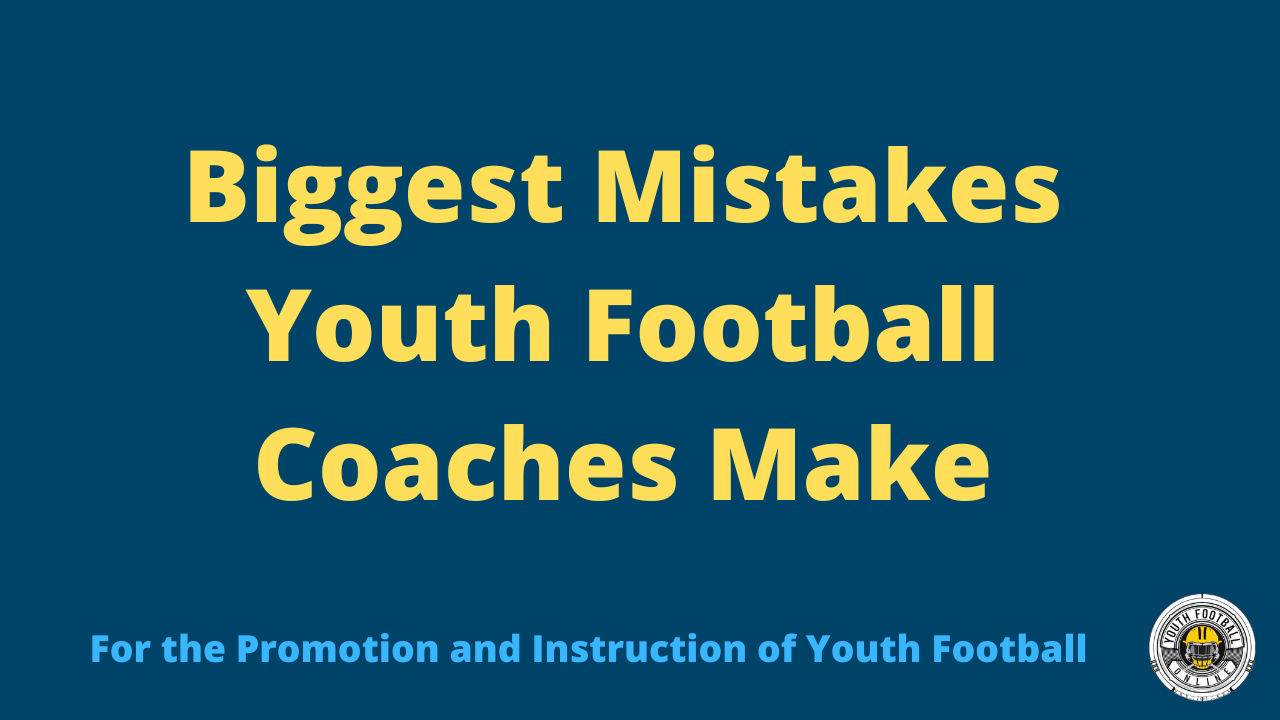 Coaching youth football isn’t easy. There’s a lot of moving parts and there are a lot of areas that need to be practice in a short amount of time. With that said, you need to make sure you find time to work on certain things because at some point they will be the difference between winning and losing. Here are the biggest mistakes youth football coaches make- avoid these mistakes and you’ll play better football and probably win more games.

Biggest Mistakes Youth Football Coaches Make & How to Avoid Them

Throughout my years of coaching I’ve noticed so many teams struggled to execute efficiently in short time. This is an area that is vastly overlooked by the majority of coaches. Be honest- how often do you practice your short time offense? Not very much or at all I bet. About 5 years ago we lost a game because of our execution in short time. After that game I made it a point to commit at least a little bit of time to our short time / under two minute offense every practice. It’s little things like teaching the kids how to get aligned quickly and spiking the ball. It’s little things like coaches getting kids two plays if they are out of timeouts. Kids have to understand that there needs to be a sense of urgency when getting to the line but avoid making mistakes as well. Mistakes- like illegal formations, illegal shifts, and false starts are common.  It’s important for the kids to understand that they need to be fast, but also be focused and controlled. Your players and COACHES need to practice this during the week.

This past year we focused a lot on being really good offensively in short time. We scored 8 of 9 times that we had the ball with 2-minutes or less on the clock. When we would get the ball and score right before halftime it was huge for us. In the first round of the playoffs we were down by a touchdown with less than 2 minutes left. We drove down and scored with 30 second left and ended up winning the game. The difference in that game was that we practiced our short-time offense and short-time defense and they didn’t. Because of that we played in the championship and won, they ended up going home.

So many teams don’t practice their two-minute defense.  If you are good with your play calling and play execution in short time it’s an area that your team will probably have an advantage in every week. I recommend going no huddle and having plays on wrist coaches. I’ll also suggest having one word play calls. Hurry up/short time offense doesn’t take a lot of time to practice- work on it a little bit every practice. Coaches, don’t be the reason your team loses- practice hurry up offense!

Mistake 2: Not Having an Extra Point Block Play

How many games have you won or lost by a point or two? If you were to look at scores across a league many games will be within a point or two. Extra points are so big in youth football. If you score three times and they score three times but they converted more extra points then they’ll win. In youth football most leagues will award you two extra points if you kick and make it. In my experience many teams practice kicking the extra point, but most don’t practice an extra point block. They’ll just tell the kids to line up and block it. They won’t have any actual extra point play installed. We will work at least 2 times a week on our extra point block. We will execute an overload blitz on one side and a twist stunt on the other. We invested a lot of time in our block play and it paid off. Let’s go back to the first round of our playoff game again- we ended up winning the game 28-26. We both scored 4 times but the difference was they were only able to make 1 extra point kick, we blocked the other 3. We made more of our extra point (s) kicks and that ended up being the difference. We were evenly matched talent wise, but because we were better in situational football and had a really good extra point block we went to the championship and they went home. Going forward, I bet those coaches will work more on blocking extra points. Installing an extra point block play isn’t expensive in regards to practice time, so do it!

Mistake 3: Install Plays, Not a System

So many youth football coaches, especially at the younger age levels just run plays, they don’t run a structured system. It’s important to have plays that all complement each other. Youth football is all about deception- make all the plays look the same. Another mistake many coaches make that I’ve noticed is that they don’t have a play-action pass off of their best run play. If you are a Power heavy team, you should have at least 1 play-action pass off of that Power run play. When you have a system of plays it will allow you to be truly balanced and allow you to attack all areas of the field. If the defense comes out and wants to stop a particular play, you’ll hit them with a complement off of the play they are committed to stopping.

I’ll use my Jet Wing T Series as an example of a system. All our plays in our Jet system are off of Jet Sweep:

Opposite of Motion Off-tackle: Buck

Opposite of Motion Outside (edge): Reverse Buck

Play-action off of Buck: TE -Over

Buck and Jet are our best run plays so we have play-action passes off of them.

You can see how there is a play that attacks each area of the field and they all look like Jet Sweep. This will force the defense to have to defend the entire width of the field. The link to my playbook is below.

In my opinion, the Pursuit Drill is one of the best drills you can do for defense. It is a drill we consider an “everyday” drill. We’ll do the pursuit drill every single practice from the first one to the last practice of the season. We’ll even do it to end our pre-game warmup. The pursuit drill is worth the investment because it works multiple defensive aspects at one time. The pursuit drill practices alignment, assignment / gap responsibilities, conditioning, pursuit angles / paths, and develops the mentality of getting to the football. In addition, if you run zone coverage you can do zone drops in the pursuit drill as well. The pursuit drill is great because it works the 3 A’s of defense- Alignment, Assignment, Attack. During the season we will line up our opposing offense’s formation so on top of everything else we are practicing our alignment against the team we are playing. I’ll say that the pursuit drill is probably the overall best drill in football. It’s a fantastic drill for conditioning and if you make it fun and keep it upbeat, the kids will actually like doing it. We’ll time how long it takes our players to get to the ball and if they don’t beat the time they run more. Pursuit drill  also works accountability, effort, and makes the kids compete.

We score so many points each season because we use formations to create misalignment. So many teams don’t align to our formation properly which gives us leverage and/or numbers advantage to a side. The number 1 priority of your defense should be to make sure that your kids are aligned properly to the formation they are seeing. You have to match numbers- you can never allow the offense to outnumber or out-leverage you to any side. Practice alignment against all personnel groupings- work in alignment against double TE, spread, 3-man surfaces, and unbalanced formations. It’s important to make sure your defense is aligned / adjusted to unbalanced formations, without over-shifting to them.

Motion is a very underrated and under-utilized tactic on the youth football level. With that said, most teams don’t practice how they adjust / react to motion. Most defenses we see play man to man coverage- so when we motion a player across they either don’t run with their guy, or they don’t keep up. This will give the offense an extra blocker at the point of attack and/or that motion player will be wide open on a pass route. Defensively, make sure your players understand that if they play man coverage they have to run with their guy or pass him over to someone on that side. If you play zone, you have to roll or bump a player out to match the numbers. Plays like Jet Sweep are becoming even more popular and you will need to make sure your kids understand how to adjust to the full speed motion. Proper defensive alignment is much easier when you scout your opponent and have an idea of what is coming. Practice how you handle motion!