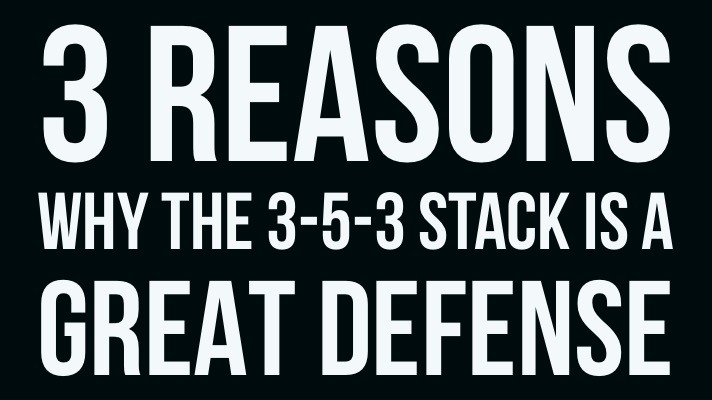 The 3-5-3 Stack Defense is one of the best defenses in football. It is becoming more and more popular as more offenses are spreading the field and becoming multiple. The 3-5 Defense can easily align to spread formations while still being strong against the run and power formations. Here are 3 reasons why the 3-5-3 Stack is a great defense:

Easily Adjusts to any Formation

The 3-5 Stack can easily adjust to any formation with minimal movement. More and more teams are spreading the field so it’s important that you have a defense that can easily adjust to those spread formations. Aligning against spread formations is very simple as you only have to move 1-2 defenders. This defense will allow you to adjust to their spread numbers, while still maintaining a six man run strong box. This is important because teams will spread you out then run inside. Just because you are facing a team that runs the spread offense, that doesn’t mean they are throwing the ball every play. Most teams will spread the field and run the ball inside, so having at least six defenders in the box will help you defend against inside runs. This is also a great defense against compressed power formations. The 3-5 will put eight defenders in the box against double tight-end formations. The 3-5 can easily adjust to unbalanced formations as well. With more and more teams going multiple, it’s important that you have a simple defense that can adjust quickly and easily to ANY formation.

Related Content: 5 Reasons Why You Should Run a Stack Defense in Youth Football

Coaching Points for the Defensive Line