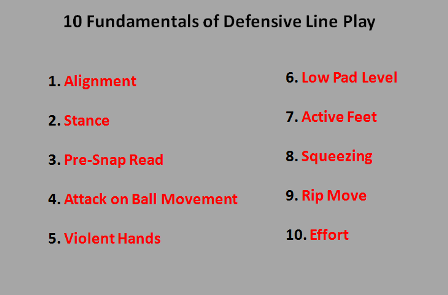 Coaching the defensive line is very important and there are many youth football coaches that do not focus enough on coaching up their d- line.  The game of football is won at the line of scrimmage- if you control the line of scrimmage, you will control the game. Here are 10 fundamentals of defensive line play that should be worked on frequently during your defensive individual sessions.

Here are the 10 Fundamentals of Defensive Line Play:

If your defense isn’t aligned to the opposing offense’s formation properly, it does not matter how technically sound your defensive line is.  It is critical that your linemen understand formations and adjust to the strong side of the formation. Most teams have their middle linebacker align the defense, but we teach all our players to recognize and adjust to unbalanced formations. The kids need to align properly based on their defense’s scheme as well. If on a certain call or defense you need your defensive tackle to line up head up on the offensive tackle, then your DTs needs to align head up on the OT. It’s important that kids know where to line up every snap.

Teach your defenders to notice if the offensive linemen are sitting back in their stances. If so, this implies that they might be pass blocking. In youth football it’s very easy to tell if a kid is pulling or pass blocking.  Kids will typically give away what they are going to do because they will lean one way. If a guard is going to pull, then you may notice him leaning to the way he is going to pull. If he is going to execute a pass block, the offensive linemen may sit back in his stance. If the offensive linemen is in a good stance and looks ready to go, that means the play is probably coming right behind him. The line splits are also excellent tells for your defenders. For example, if the OL cheats their splits down, it could be wedge, or even a pass. Teach your players and coaches how read body language.

Get off on Ball Movement

When coaching our defensive linemen we use the phrase ‘violent hands’ frequently. We want to shock the blocker with a powerful jolt with our hands inside and our thumbs up. It’s all about hand power, speed, and placement. The hands will be used to shock and shed the blocker. We want our players to engage the blocker with their hands and either launch or dip and rip. We do this shock and shed drill every practice.

When players stops their feet that is when they will be defeated. When a defensive linemen stops their feet they will give up leverage, ground, and will end up getting washed down or pancaked. It’s important that your defensive linemen always bring their feet with them when they execute their rip move. Meaning, the dip and rip technique should be quick, violent, and executed with active feet. It’s important that you make sure the kids never stop moving their feet. No reaching or looking, move your feet and get there.

The squeeze technique is the best way to beat kick-out and/or trap blocks. When an offensive linemen blocks down, leaving you unblocked, that means you are going to be the target of a trap or kick-out block. To avoid getting trapped or kicked out, the defensive linemen must get their hands on the down blocking offensive linemen and squeeze down with him, closing the horizontal space.  This will allow your defensive linemen to take on the trap block and it will close down any space. If a defensive line gets a good launch and squeeze on the OL, it won’t allow them to block down or get onto a linebacker cleanly.  You don’t want your DL completely following the down blocking linemen down because he will just wash himself out of the play. Hands on the blocker, squeeze down, close the space, and look to blow up the trap blocking (up-field shoulder aiming point).

One of the biggest reasons the Wing T, Double Wing and Single Wing work so well in youth football is because not many youth football coaches teach or even know what squeezing is (or wrong arming). Against these offenses that use down blocks, if you don’t squeeze, you’ll get gutted.

Here is an excellent drills that works squeezing and wrong arming:

Regardless of position, football is all about effort. We want our players to play hard every single play. We want a never quit attitude and we want to be relentless. If a kid wants to play defense for us they better be able to hustle to the ball carrier on run and pass plays. In order to get to the ball carrier and play defense with our “swarm” mentality (gang tackling) they need to give effort. We focus on technique and all that good stuff, but we also coach and demand effort!  Regardless of technique, if you have a kid that is a good effort player, he will end up being a solid football player for your team.