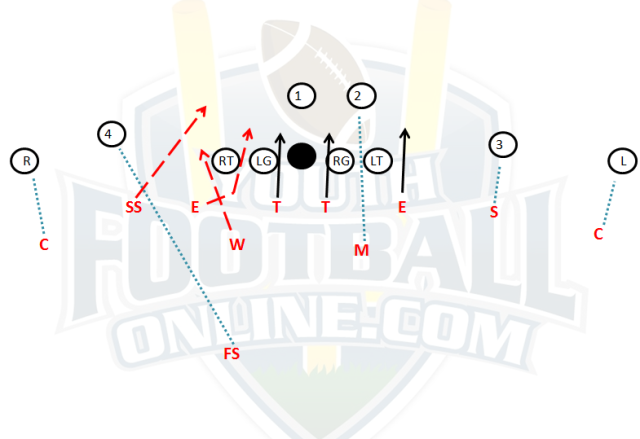 The Tornado Blitz out of the 4-2-5 Defense is an overload blitz that works very well against spread formations. This blitz is great because it defends the off-tackle gap and it will also do a good job of containing the outside. I personally like to execute this blitz from the wide side of the field. It will take away the field and squeeze the offense into the boundary. This blitz utilizes a twist stunt with the blitz side (E) and (W) backer. The (E) will slant down, ripping across the offensive tackle (T). It’s important that the (E) slants through the (T). You do not want the (E) to slant himself out of his gap responsibility. We play man to man coverage behind this blitz but you can play zone behind it as well. The 4-2-5 defense features 4 defensive linemen, 2 linebackers, and 4 defensive backs. You can name the positions whatever you want. I just used a very generic position naming system.

Play-side (E): Slant down, B-gap responsibility. He must rip through and cross the face of the (RT).

Back-side (E): Contain. Must keep his outside shoulder free.

Sam (S): Man to man coverage on the right inside receiver (3).

Strong Safety (SS): Show man to man coverage on the (4), then start creeping up and in towards the line of scrimmage. The (SS) blitzes off the edge on ball movement. When blitzing he needs to maintain outside leverage. He is the wide side contain player.

Free Safety (FS): Show that he is playing deep middle, then as the (SS) starts to show blitz, the (FS) has to shift down.  He is now responsible for the (4) in pass coverage. It’s important that the (FS) doesn’t get his eyes caught looking in the backfield. If he bites on any type of run action, he will get beat for  big yardage. The (FS) is playing man to man on the (4) he needs to follow him wherever he goes.

Tornado Blitz out of the 4-2-5 Defense Vulnerabilities:

You can live by the blitz, but you can also die by the blitz. This blitz sends the entire wide side of the defense on a blitz. You can hurt the defense with play-action, quick screen, slip screens, and attacking away from the blitz.

After you beat the defense with this blitz a few times they will adjust. Especially when you are facing well coached no huddle teams.  Also, many coaches will scout you, so they will know its coming and prepare for it. If we initially call a blitz play, we can cancel the blitz by yelling “kill”. We can kill any of our blitzes. When we kill the blitz we will just adjust back into our base defense and alignment.

Unfortunately for me, I have to play this  really,  REALLY good and well coach  no huddle spread team every single season. As we do with our offense, they call their plays depending on the defensive alignment they are seeing.  Early on in our rivalry they they were killing us when we blitzed. They had a few really nice blitz beaters. So after a few times of learning the hard way, we decided we had to be less predicable.  We would show blitzes, then “kill” and reset into our base defense. This helped us tremulously and ended up really confusing the offense at times.  This tactic helped us beat them in our playoff game early last month. The point of the story is that even though there are plays that can hurt this blitz, there are things you can do to bait the offense and make them think you are blitzing. See image below:

You can see we are showing our Tornado Blitz, but instead of our (SS) coming off of the edge, he bails back into the flat. We will show man coverage pre-snap, then bail back into our cover 3 zone (which is our base defense). So when teams want to hurt our blitz with the quick passing game, we will have our (SS) jump the route.  It’s important that the (SS) shows blitz, then opens up and gets to his flat zone. You can have the (SS) eye the slot receiver (4) and aggressively jump any quick blitz beating routes. We will usually have our (W) and (E) still execute their twist.  This Tornado Blitz out of the 4-2-5 Defense is very easy to install and will generate some series pressure on the offense.