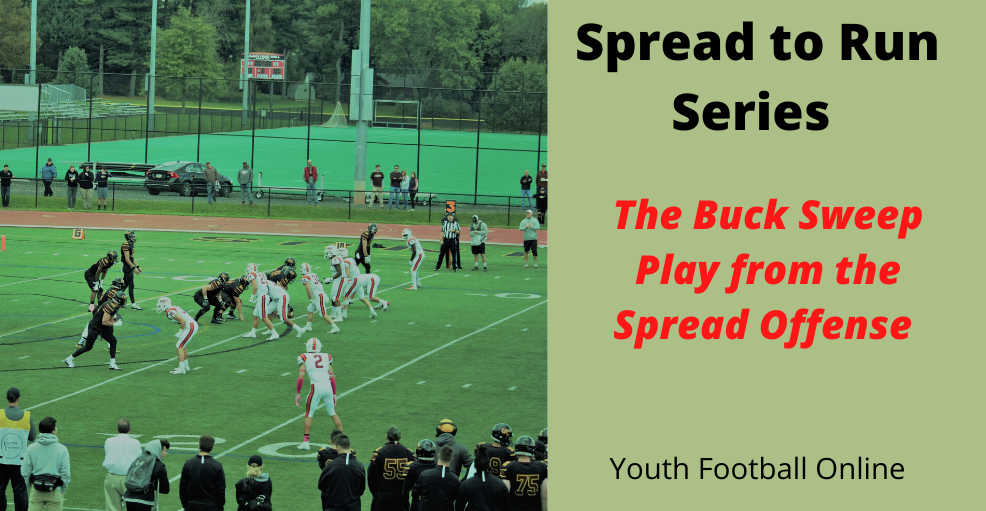 The Buck Sweep from the Spread is one of the most powerful plays in football. Buck Sweep faded into the forgotten land of niche offenses for a decade or two when the spread really started to take off. While it has always been the staple of the Wing-T, with the modern spread to run offensive system, the Buck Sweep is making a resurgence.

The Buck Sweep Play From the Spread

Part of what makes the Buck Sweep so successful is the same reason why the Power and Counter are two of football’s greatest run schemes, angles and leverage. These three plays fit into a family of run schemes called Gap Schemes. We talk about this in detail in a separate post but the idea is that they will rely on the leverage that blockers gain by blocking down or away from the aiming point of the ball carrier. This allows linemen to gain an advantage even if they might be over matched.

The rules for the Buck Sweep are pretty simple. Everyone that is on the play side is going to block down. In order for the play to be run effectively there must be a 3rd lineman, or what coaches refer to as a 3-man surface. This third man can come from a Tight End, an H Back or even a Tackle over, but there needs to be a third blocker on the play-side. The Tackle and the 3rd Blocker (who we will call Tight End) are going to be responsible for their inside gaps. This means that the Tight End will be blocking down on the C Gap Player. The Tackle will be blocking on anyone in the B Gap.

What makes the Buck Sweep a little different, and can make it hard to execute, is that both Guards are going to pull. The play-side Guard is going to pull and assume that there will be a defender outside of the Tight End. He is going to block any defender that he finds past the Tight End out towards the sideline. We always tell our front side pulling Guard to assume that there will be a player that he needs to kick out so that he is ready. If there isn’t a player outside than he will turn up the field and look for the first threat.

The backside guard is going to pull as well. His first responsibility is to deal with any penetration so he must get his eyes in the play-side A Gap. If there are any blitzers he will take them to ensure that the back has a chance to get the ball back to the line of scrimmage. Assuming that there are no A Gap blitzers, the backside Guard will pull around and follow the front side Guard’s block. If the Front side Guard kicked a defender out than the Backside Guard will flow inside of this block and block the first defender, he finds in the hole. If the Front side Guard ended up log blocking the outside defender than the Backside Guard will go around the block and lead the runner to the outside. This seems like it is difficult and while it does require reps and practice, players tend to grasp the idea pretty quickly.

There are a variety of different things you can do in the backfield, but the path of the runner must stay consistent. The runner is going to come directly across the Quarterbacks face to take the handoff. As he comes across the Quarterback, he must get his eyes on the front side Guard so he can begin to make a read. If the Guard kicks the defender out he must plant with his play-side foot and get directly down through the hole.

While the Buck Sweep can be a complex play to install, once you have the basics mastered your players will quickly pick up some of the more details that make it such a deadly scheme. There is a reason why it is one of the oldest, and most powerful, schemes in football.