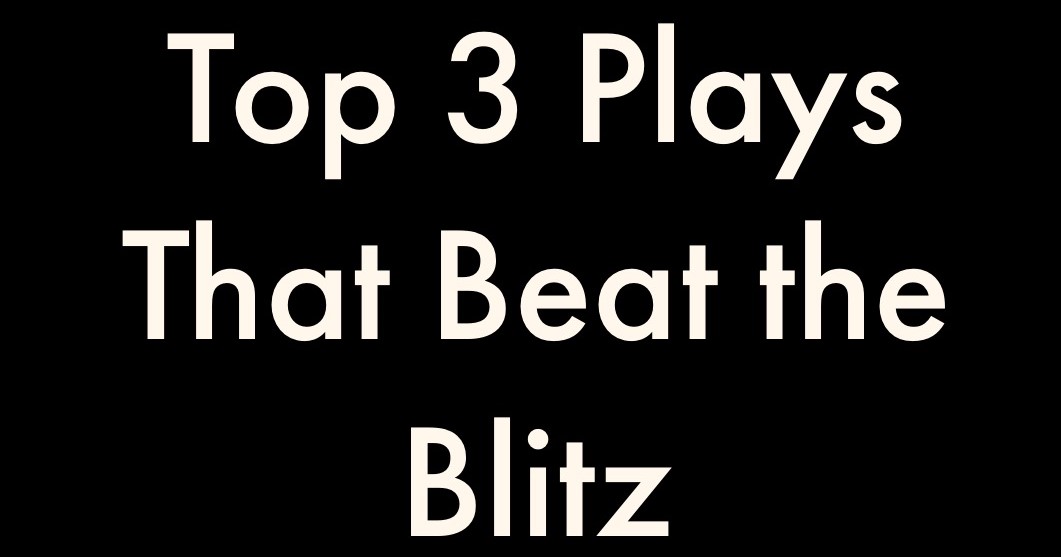 On the youth football level defenses will blitz frequently, especially on short and long down and distances. Blitzing is an effect tactic in youth football because many offenses do not have blocking rules and they do not practice picking up the blitz. Overload blitzes are the most difficult to deal with. On an overload blitzes the defense is sending more than the offense can block and there aren’t many block schemes that can pick up an overload blitz. With that said, there is an old saying, you live by the blitz you can die by the blitz. Blitzing is very risky and there are several plays that can take advantage of overaggressive, blitz happy defenses. Here are the top 3 plays that will beat the blitz:

Top 3 Plays that Beat the Blitz

The Running Back Slip Screen is a great play that will take advantage of overaggressive defenses. On the Slip Screen the QB will execute a deep drop back and look the defense off to the right. The TE, LT, and LG will chip the defensive linemen and let them rush up field. The idea behind this play is to let the defensive linemen rush the QB up-field and the linebackers and secondary flow to their left because of the QB’s look off.

1: Catch snap, drop back 10 yards, look off the defense to the right, turn and throw it to the 2.

2: Show pass blocking, then release when the offensive linemen pull out. It’s important for the 2 to go behind the pulling offensive linemen. The 2 needs to be in the backfield so that it isn’t a forward pass. This will also create an easier throw for the defense.  Catch the ball, get outside.

3: Post pattern, clear out the cornerback. Have the 3 put his hand up like he wants the ball.

The Bubble Screen is an excellent way to take advantage of over-aggressive defenses. This is a great outside blitz beater. This play will get your athletes the ball in space quickly and allow them to work in the open field. This is an easy play to execute and it is a very safe throw. If you are a Spread Offense, you need to have a built in Bubble Screen.

X: Block first threat to the bubble screen. If the CB is off and the defender covering the (S) is up tight block the uptight defender. If the CB is playing uptight, the X will stalk the CB.

S: When running the bubble screen play, make sure your receiver takes his first step outside and into the backfield.  It is vital that the bubble receiver gets depth and gets his head around after no more than two steps.

QB: When executing the bubble screen play we want the ball ideally thrown to the outside shoulder, jersey number level.  Catch the snap, turn and throw. The football needs to be out quickly.

HB: Fake to the left, try to hold the linebackers. A good fake is critical.

In my opinion, Jet and Rocket Sweep are two of the best plays in youth football. Rocket Sweep is a bit more difficult to run on the younger age levels of football. Jet on the other hand, is a play that could be install on any age level of youth football.  Jet sweep will get your athletes the football in space very quickly. When defenses are sending inside pressure just call Jet Sweep and get your running back outside fast. The defense will just blitz their defenders out of the play and they will have no linebackers left to pursuit the ball carrier. This is our version of the Jet Sweep. We love running this out of an unbalanced formation (tackle-over) with the Split-end cracking.

SE: Stalk block cornerback or you can have him crack the outside backer.

QB: Take snap, turn and hand to the 3 coming in motion.

3: Full speed jet motion on first sound of the QB, take handoff, and get outside.

Rocket Sweep is blocked the same way as Jet, but the only difference is that the motion is into the backfield and the ball is tossed out to the motioning back.