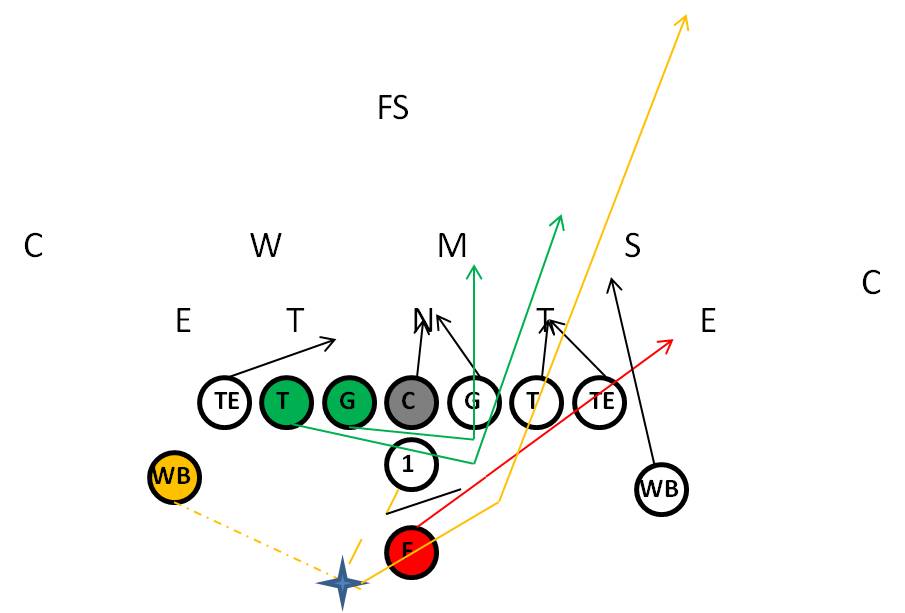 The double wing offense is an offense that features two tight-ends, two wing backs, one fullback, and a QB in the backfield. This offense utilizes zero line splits. This will allow the offensive line to execute double team and down blocks on the defense very easily. Utilizing zero line splits also reduce the distance the pulling linemen have to run when they are lead blocking or kicking out a defender. The double wing offense is a power offense that really gets numbers (blockers) to the point of attack. This offense also has a very good play-action passing game.

Double Wing: Super Power Play vs. loaded box. The double wing offense is a ground and pound offense. DW teams will either down block and kick-out with a FB or guard or they will utilize double teams at the point of attack. I didn’t draw it up with a double on the nose, but you can have the play-side guard and center double team the N. #doublewing #footballplay #youthfootball #offense #tuesdaymotivation #coaching

The double wing offense is easy to implement. It is an effective offense in youth football. The wedge play is very difficult to stop. To execute this offense you will need offensive linemen that can pull. Many double wing offenses will have their backside guard and tackle pull, which means you will need 4 kids on the field that can pull. In addition- you will also need to teach the back-up linemen how & when to pull. The double wing coaches that pull both linemen tell me that they have every single player on their team practice pulling (makes sense).

Here is a standard double wing formation (there are other formations that the double wing offense can be executed out of):

This football play features double teams at the point of attack. The play-side defensive tackle and nose guard will get double teamed. The play-side defensive end will be kicked out by the fullback. The back-side guard & tackle will pull. The PS guard will pull and look to get onto the middle linebacker. The guard’s pull path will always be right off the center and PS guard’s double team block. The pulling guard must always look to block inside to outside (pick up any A-B blitzes). The pulling tackle will lead block through the hole. The pulling path will be right off the tackle and TE’s double team block.

The QB will open up to the motion side and give a quick pitch to the wing back going in motion. After the QB pitches the ball he can turn and lead block.  You can have the QB carry out a fake if you don’t want him blocking.  The WB will go in a 3 step backwards motion and will receive a quick pitch and get downhill behind the double teams. The motion player cannot go or lean forward until the ball is snapped.

The power play out of the double wing offense can also utilize a down blocking scheme. Down blocking will allow the offense to take advantage of blocking angles. Down blocking rules are as followed: Gap- Down- Backer. If you are having problems with a C-gap defensive end you can have your PS WB down block on him. We call that our “Hammer” block.

If the defenses are keying your fullback you can have the pulling guard kick-out the defensive end and just have the FB fake trap and fill back-side A-gap. Many times defenses will say well, lets follow the fullback, he will take us to the ball. When you have the full back fake trap, it will definitely hold that middle linebacker. This is an excellent key breaker.

This video is an excellent example of the down blocking scheme being executed beautifully. You can clearly see the down blocks and the kick-out block.

This counter play is a very explosive play. Once the power gets going defenses will adjust to the motion side. Once the defense starts committing to stopping the power, the counter play will gut the defense for big yardage. Many times you will see these counters go for big time yardage. The QB opens up to the motion side, gets depth into the back and executes an inside hand-off to the WB. It is the vital that the WB in motion fakes like he is getting the ball. This diagram features the down blocking scheme, but you can use double teams at the point of attack as well. Even though this is a counter play (counter action in the backfield), it is essentially a power play.