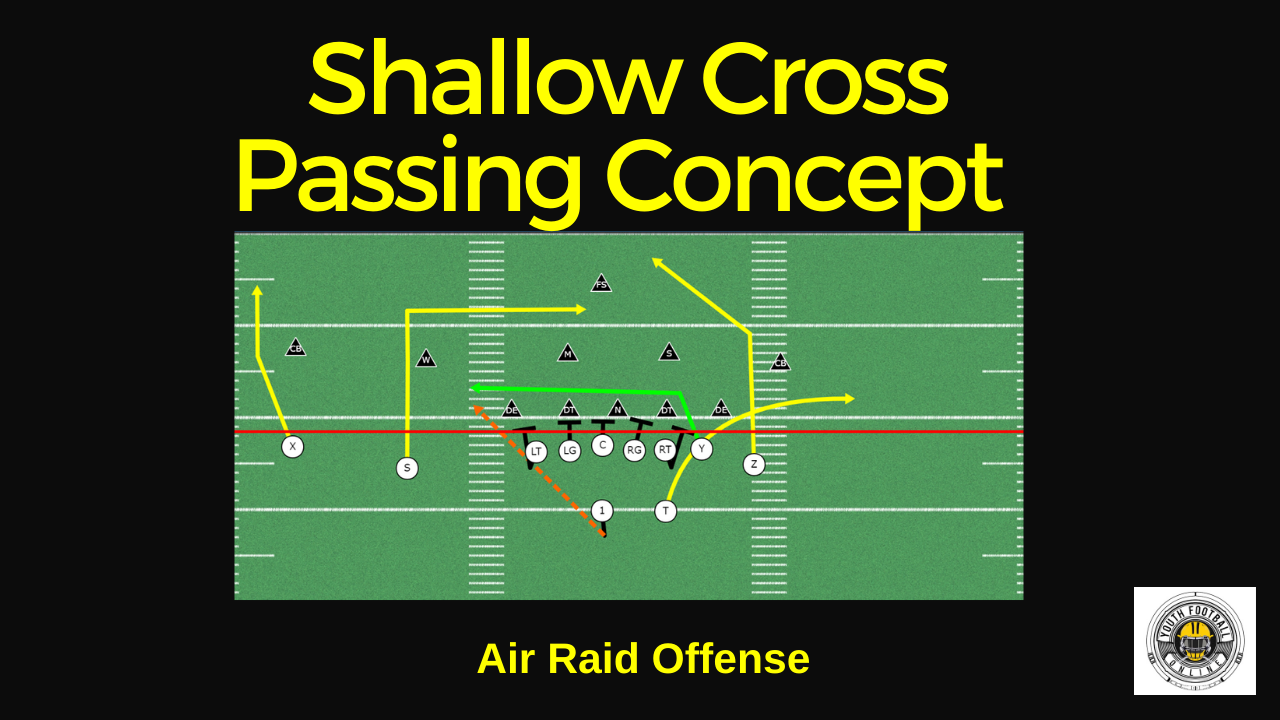 The Shallow Cross Passing Concept is a great way to stretch the defense out horizontally. It’s great against man to man coverage. It’s also a great zone coverage beater as well. This concept puts a lot of pressure on the linebackers and makes them defend in space. The shallow cross by the Y will allow you get him in space very quickly. It will also allow him to work the entire width of the field. This is especially effective against man to man coverage. The dig route by the S will allow your slot to use the field from the hash to the far sideline. It’s very important that your S continues his route- make the defenders have to chase your receivers. If you have a fast slot and an athletic TE this play will be very difficult to defend. Against zone coverage, have the receivers sit in the holes in their zone, rather than run across- especially on the dig route.

Y: Shallow cross. Release immediately for the heels of the near DE/DT gaining no depth. Run over his heels & through the tackle box with speed. Work for a depth of 1-3 yards on the opposite sideline. Don’t stop running.

S: Outside release, drive route vertical then break into the dig at 10-12 yards. He must continue his dig across the field if it’s man to man coverage. If it is zone coverage, he has to sit.

X: Outside release, drive your route vertical. This is a clear out route.

T: Release into the flat. You can have him stay home and pass block instead.

Z: Post pattern. Drive route vertical, break to the post. This is a great way to attack the defense is if the middle of the field is open.

Shallow Cross Passing Concept With Slide Protection Away From the T

If you are concerned about edge pressure you can slide the protection oppose of the T and have the T block the defensive end. This is a good answer for the all to common edge pressure that most youth football defense bring. The routes by the receivers stay the same. The only difference is the T doesn’t release to the flat.