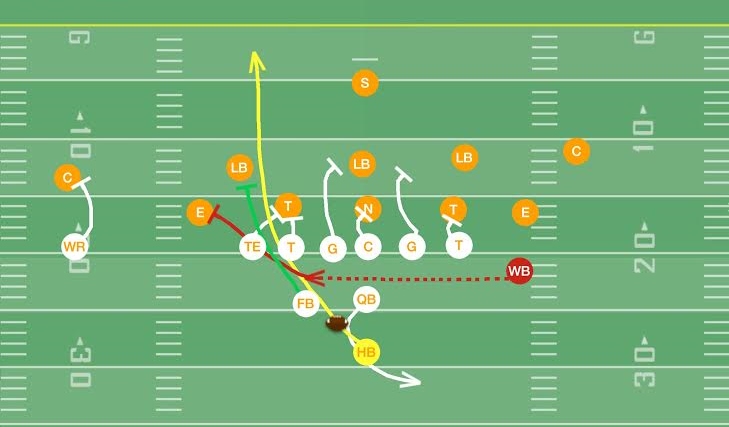 This power play is out of the “Offset” Pistol Formation (what we call it). There are many coaches that will call this the “over” Pistol Formation. This play is drawn up out of an unbalanced formation . Keep in mind that the (TE) is not an eligible receiver. The (TE) is covered by the split-end (SE). I like running this power to the (TE) side because there are so many more blocking options.

I also like bringing the (SE) over to take the cornerback out of the play. Many times in youth football if a cornerback doesn’t have a receiver he will line up just outside of the (TE). As we all know, the cornerbacks are going to be excellent athletes, so I really don’t want them disrupting the play. When we go unbalanced we will always go on a quick snap count. We want to go on a quick snap count so the defense doesn’t have time to align properly. The kids need to break the huddle fast, get their splits, get down, and execute the play.

Center: Block head up nose guard. If the nose is a problem cut him down (cut block).

Split-end (WR): Stalk block cornerback. If the (C) is playing press man to man, you can run him off.

Wingback (WB): Motion across the formation, kick-out defensive end. If it is a 4 man front kick-out outside linebacker (contain player). THE MOTION PLAYER CANNOT GO OR LEAN FORWARD UNTIL THE BALL IS SNAPPED.

Halfback (HB): The (HB) aiming point is off of the (TE) & (T) double team block. The ball carrier needs to cut outside of the double team wall off and inside of the kick-out block.

Quarterback: Receive snap, turn and hand off to the (HB). After the QB secures the snap and executes a clean handoff exchange, he will carry out a boot leg fake. This will hold the backside defenders.

This play is blocked with the tradition power blocking scheme. This play features double teams at the point of attack. The (TE) and play-side (T) will double team the defensive tackle. The wing-back will come in jet motion kicking out the end man on the line of scrimmage (the defensive end vs. 5 man front). The (FB) will lead block through the hole, taking the outside linebacker.

You can see in the diagram that the interior defenders are walled off, while the defensive end is kicked out. The ball carrier cuts right outside of the (TE) & (T) wall off and inside of the (WB) kick-out block. The success of this play depends on the (TE) & (T) double team block & the (WB) kick-out. The double team blockers need to drive that defensive tackle back. The kick-out blocking (WB) really has to gut that defensive end out. Aiming point of the kick-out block is the inside hip of the defender the (WB) is kicking out.