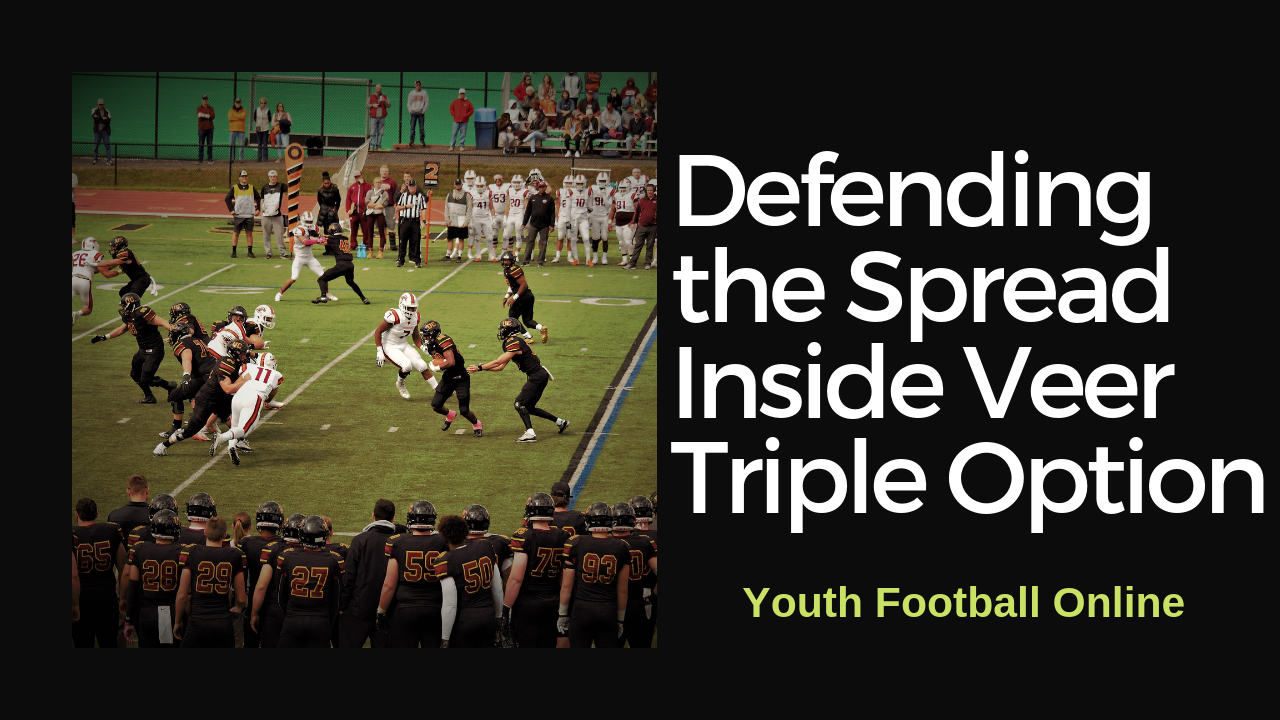 Having coached the triple option for over 11 years, I have seen many different ways teams have tried to stop it.  Here are three things teams have done in the past that have given us issues while trying to establish the inside veer rushing attack.

If you’re going up against an inside veer (triple option) team, you need to first recognize who they are reading from your defense.  The inside veer consists of a dive and pitch read.  Normally, inside veer teams will read the first defensive lineman from the offensive tackle out as the “dive” read.  This can be your 5-technique in any even front defense (4-3, 4-4) or your 4/4i-technique in an odd front defense (3-4/5-2, 3-3-5 stack).  After the dive read is identified, the next defender outside of him is usually the pitch read, and in most defenses, the OLB will be the pitch read. See Figures Below (A,B,C,D):

Inside Veer vs. 4-3 Defense

Inside Veer vs. 4-4 Defense

Now, in most option systems, they will try to get everybody else blocked.  This includes your ILBs, DTs, and run support players in the secondary.  The blocking by the playside slot/wing will change depending on how many men are in the box (7-man vs. 8-man fronts). See Figures Below (E, F, G, H):

One way you can make it difficult for an option team to have success is to muffle the dive read for the QB.  The “Down-Up” move is a good way to give an option QB a “blurred” read while deciding on whether to give the ball to the dive back or keep the ball and carry out the pitch phase.

The “Down-Up” move consists of the dive read playing flat down the line of scrimmage on the offensive tackle’s down block, showing a dive read.  However, after he takes two flat steps down the LOS, he will turn his shoulders and play upfield for the QB.  Most high school option QBs need plenty of reps to recognize this technique and know that the give is the best option.  Most QBs will likely pull the ball which will result in your defensive end having a clean shot on the QB in the backfield, along with a negative gain.  See Figure I Below:

Another move that can be done if you are running a 4-3 defense is the gap-exchange by the dive and pitch reads.  College option teams read the “Stack” (DE and OLB) in the 4-3 for both dive and pitch, however, it’s usually more simplified on the high school level.  If you switch responsibilities by having the OLB take the dive and having the DE take the QB, you’re looking at a give read for most QBs, but the dive back should be met in the hole by the OLB playing hard in the “B” gap.  See Figure J Below:

The inside veer play’s success is predicated upon getting the inside linebackers, or Mike LB blocked in every defense.  The blocking scheme usually allows for the playside offensive tackle and/or sometimes the playside slot/wing back to account for the ILB.  However, it is important that you coach up your defensive linemen very well.  If you are more of a “read” oriented defense, your defensive end (normally the dive read) needs to use his hands very well on the offensive tackle.  If he reads a “down” block or inside release by the offense tackle, he needs to SQUEEZE the OT down the line of scrimmage so he doesn’t get a free release on your ILB/Mike.  The teams that do this well can let their ILB/Mike roam free.  If you have a team that can accomplish this, then your DE can take the dive and your ILB/Mike can come over the top for the QB.  This will allow you to keep your OLB on the pitch back without having to commit anybody from the secondary towards option responsibilities.

Another key factor is moving back the depth of your ILBs and/or Mike LB.  If they are at a depth of 7-8 yards, then it makes it tougher for an offensive tackle and/or slot/wing back to block them.  The tighter they are to the line of scrimmage, the easier it is for the offense to block them since they will have closer angles.  Whatever you do, DO NOT SHOOT BLITZ THE ILB/MIKE BACKERS VS INSIDE VEER!  You are wasting them and they will be picked up on the blocking scheme. See Figure F Below:

Now, as highlighted in the previous section, getting your defensive linemen to squeeze and use their hands extremely well is very difficult to do unless it’s taught from day 1 of camp and your kids are very good at reading blocks.  If all else fails, one rule of thumb is to make an option team throw the ball in order to beat you.  Remember, option teams spend the least amount of practice time on the passing game and pass protection, so it is naturally their weakest point.  Find out in your scouting process if the team you are playing has a high-quality throwing quarterback.  If he is adequate at best, you may want to think about using your secondary to help defend the running game.  This is the reason why I prefer a 7-man front as opposed to an 8-man front when defending the option.  If you are a 4-3 or 3-4/5-2 team, you can rotate your secondary to help with the option game while still having numbers to defend the pass.  See Figure L Below:

As seen in the figure above, the defensive end takes the dive back and the outside linebacker takes the quarterback.  However, with a hard secondary rotation to cover 3 on motion, your safety can roll down the alley and play the pitch hard.  The slot/wing back should be attempting to block him, but if he’s coming at full speed when they see pre-snap motion, it will make the block very difficult.  Also, with the rotation to cover 3 on motion, the backside safety moves over to deep-middle coverage, which allows him to help out on any possible play action routes (IE: Post/Wheel, Verticals).

The same can’t be said for 8-man front teams.  Triple option teams will try to make your free safety commit to the running game based on their blocking scheme, which allows for much bigger plays to be made in the play action game.  See Figure M Below:

In conclusion, of course there are answers to all of these techniques, stunts, and coverages, but it will most likely involve different formations or different plays (IE:  Midline, Outside Veer, Midline Triple, Zone Dive, etc.).  However, if the spread inside veer (triple option) play has been your nemesis in the past, these techniques will allow for success in shutting it down.  Just make sure you have answers for their adjustments!