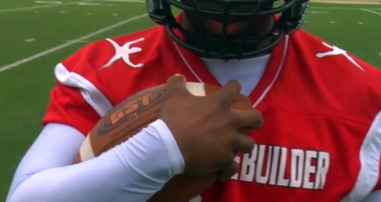 These are the three running back progression drills we did at our international youth football camp last month. These drills are very easy to execute and they focus on the core fundamentals. These progression drills can be done every single time you break into individual position periods.

Put the running backs into 3 lines. The first 3 have the football and the coach makes sure they are holding it securely. Then on the whistle the RBs run 10 yards, touch the line line (with hand not holding the ball) then coming back and give the ball to the next players in the line. After they go, they get into the back of the line.  Every player should go at least two times. If you don’t have a lot of running backs you can just line them all up across in one line.

This an excellent drill that works several different techniques. This drill works on taking a handoff, developing agility, and they learn how to make moves in space (juke). You will need an agility ladder and a line mat. However, cones could be used as well.

You will need an agility ladder, line mat, several footballs, and a cone. If you do not a have line mat you can use cones. The running backs line up in one line and once the RB gets to the first agility box the next one goes. If you don’t have QB (to handoff), have a coach handoff. I would also recommend going on a your snap count, rather than just a whistle.

Here is a basic running back drill we do the first day of practice. This drill is great because it practices QB/RB exchanges, works agility, and teaches the RBs not to belly towards the QB. #coaching #youthfootball #firstdayoffootballpractice

This is the ultimate running back drill. This drill practices ball security, agility, and how to lower pad level. The kids will love this drill and it is something that you should do ever practice with your running backs. This is a great drill because it works multiple techniques at once, this will save practice time and make your practice much more productive.

The kids love this running back ball security drill. This is an excellent drill because it teaches multiple techniques. 1️⃣ Works ball security. 2️⃣ Conditions the athletes. 3️⃣ Teaches the kids how to lower their shoulder and deliver the blow.