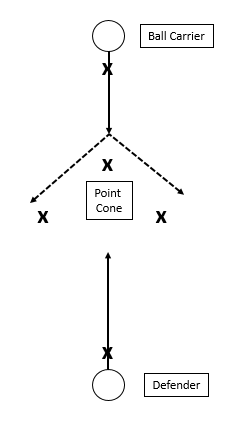 Linebackers are the heart of the defense and must be able to make consistent tackles in a variety of different situations. Sometimes linebackers have to make tackles in a confined space. In these scenarios, while the linebacker must take on and defeat a block before making the tackle, they normally don’t have to worry about tackling the ball carrier in space. The other place where linebackers have to make tackles is in the open field. Sometimes this is the result of a sweep play that has gotten to the edge or a pass over the middle. In these situations there normally isn’t a block to defeat but because of the open space the ball carrier has more room to make the defender miss. In these situations it’s critical that the linebacker takes a great angle and takes away the possible angles the runner can take.

The “Tap the Hip” drill is a great drill to get any defender, but especially linebackers, to learn how to cut the field in half and force the ball carrier to a side. In the Tap the Hip Drill the linebacker and ball carrier start on cones 15-20 yards apart from each other. 5 yards in front of the runner is one cone called the cut cone and there are two cones on a 45 degree angle from that cone (the set up is demonstrated below).

Tap the Hip Linebacker Drill for Youth Football Set Up

The Touch the Hip drill is designed so that defenders can work on taking the proper angle to make open field tackles in a non-contact setting. There are a couple of key points that coaches need to make sure they are watching to make the drill effective.

The best part of this drill is that it tends to be a self-correcting drill. Many times the players can feel when they lose inside leverage. When the players can feel themselves make mistakes they are able to get immediate feedback into what works which allows them to make the necessary corrections.