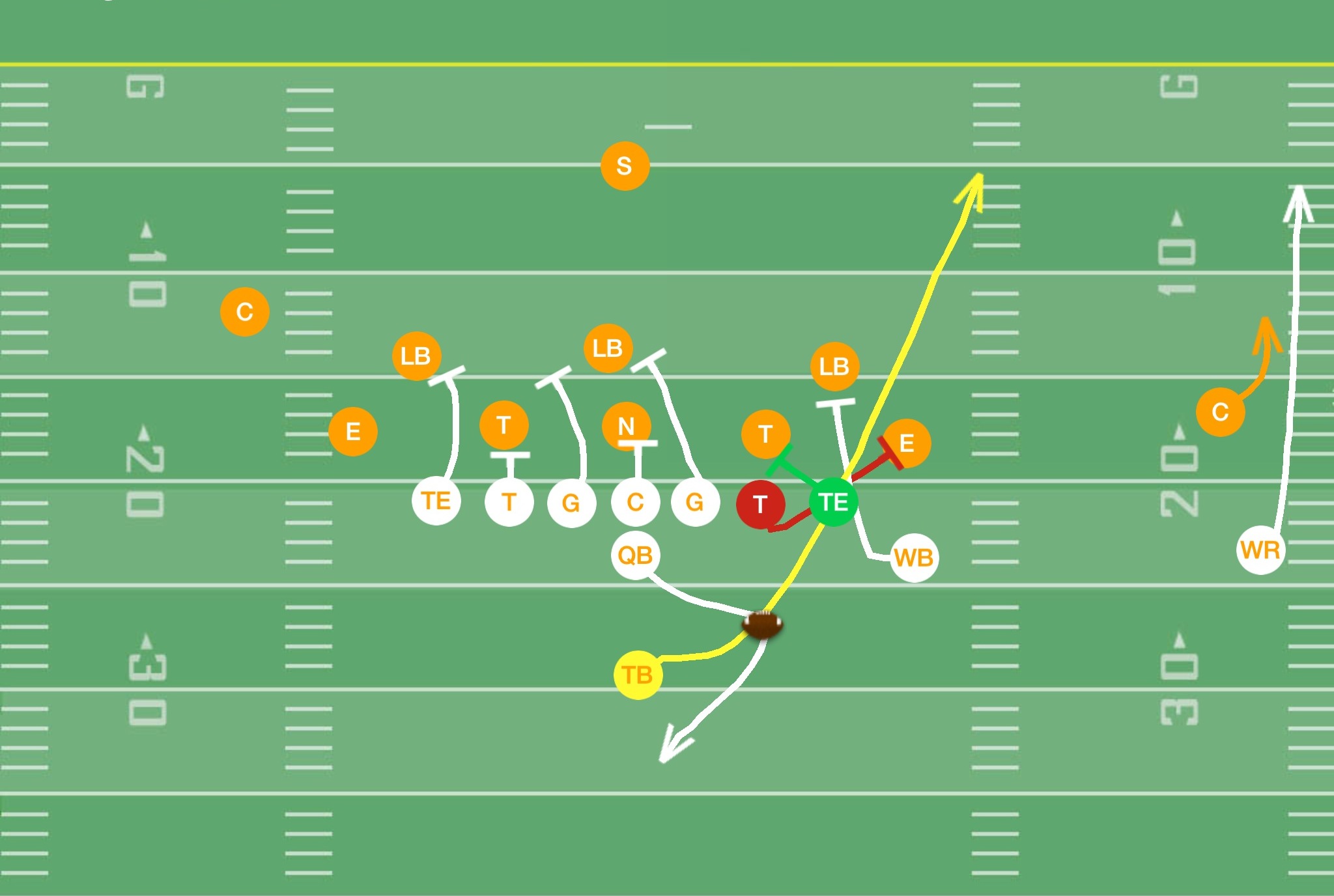 This single back lead play is a very simple play in youth football. This lead play is out of the single back, double tight-end formation. This play is drawn up with our tackle & TE cross blocking. There are several different ways you can block on this play. You can zone block. You can block this play like a power. You can just block this play straight up (base). We always look to take advantage of blocking angles so as long as the tackle doesn’t have a defender in his inside gap, we will cross block on the play-side (our “X” call).

The only issue I have with this play is that there isn’t much deception. The defense can really lock onto the TB in the backfield. It is a pretty straight forward run with the point of attack between the TE and offensive tackle. Cross blocking on this play is very effective. I would never run this play with a base or “big” on  “big” blocking scheme. I would down block & kick-out or run the power blocking scheme, utilizing some double teams.  A play-action passing play out of this formation is pretty nasty. Once you have some success with this play you will be able to burn the defense with the play-action.

RT: Kick-out defensive end. TE blocks down crossing in front of the RT. The RT takes a half step back, crossing behind the TE.

PSTE: Down block on defensive tackle.

TB: Take hand-off, point of attack is the 6 hole. Look to cut off of the RT’s kick-out block.

WB: Lead block through the hole, work onto outside linebacker.

WR:  Man to Man– run off the cornerback. Zone– Stalk block.  If the corners are playing man to man and they are not respecting the run off throw to the SE on the go route.

Coaching Point- it is vital that the QB gets the ball to the TB in the backfield, out by the 6 hole. The TB needs to be able to have his head up to see where he needs to cut. This play may not always end up going to the 6-hole. If the defensive end slants down, the TB may have to adjust his path. Also, you DO NOT have to cross block on this play.

BSTE: Pass block. Probably have to block the DE.

QB:  Fake lead play, throw to open receiver. Look for the corner route first, then to WB in the flat.  Deep drop back needed. The WB in the flat if almost always open.

WB:  Chip defensive end, release into flat. We do want bit of a delay to sell the run fake and to allow the SE to run off the cornerback. This is a somewhat of a timing play that will have to worked out in practice.

WR: Go route- outside release making the corner turn his back to the play.

To really sell the lead fake you can have the play-side tackle and TE cross block. This is a very good key breaker that will really suck the linebackers up and completely destroy man to man coverage.  On the younger youth levels this might not be necessary. A good backfield fake will do the trick.