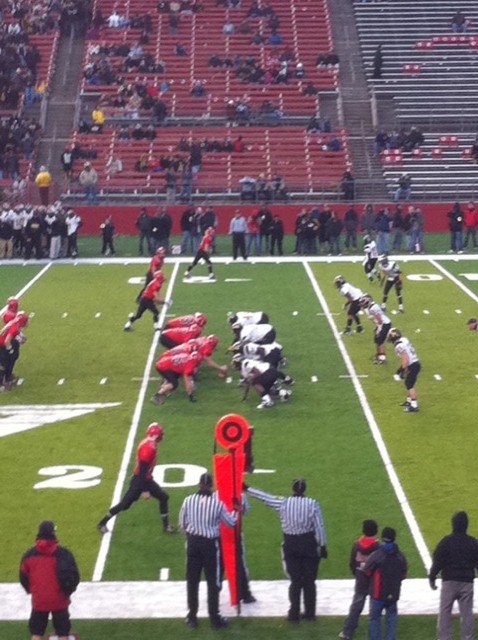 It’s a dynamic offense because it spreads the defense out horizontally, which creates running lanes inside. Spreading the defense out will also allow you to get your athletes the ball in the open field. The spread isn’t just a throw it every down offense, it has a very explosive running game, especially if the offense has an athletic QB. There are also many teams that use the no huddle play calling system. Using the no huddle will allow you to call a play that can hurt the defense based on their alignment and it will allow your offensive coordinator to call the right play consistently.

Every year we face a very good spread team. They usually go 4 to 5 wide at a time and call all their plays from the line of scrimmage, based on our defensive alignment. This team is usually loaded with great athletes, that are well coached. They skillfully used the wrist coach play calling no huddle system. Our opponent averages 30 points a game, with a ton of passing and rushing yards. The past two games we held them to 20 points or less.

We held this team to only 2 offensive touchdowns and did a great job with not giving up the big passing play. We switched from our 53 defense to a 44 defense because these guys are very fast vertically and horizontally.

Our keys to defending the spread offense ( how we slowed this spread team down):

Here is our alignment vs. their base double wide package.

Our two defensive tackles line up in the A-gaps.  The two defensive ends line up on the outside shoulder of the offensive tackles (contain). The two middle linebackers would line up 3 yards off the line and over the B gaps. The outside linebackers will line up on the outside shoulder of the two inside receivers (containment support).  The two cornerbacks would be at 8 yards and have deep 3rd  coverage. The middle safety lines up 15 yards deep playing deep middle 3rd. We had our safety line up really deep because this team was super fast. Having our safety deep allowed him to take better angles to the ball carrier.

Having the safety really deep does leave some room for a post pattern. We gave up a huge play when the offense faked a run and then threw a post pattern to the slot, with the outside receivers running off deep.  Here was the play that hurt us:

The defensive tackles will pressure up the A gaps, anchoring and taking away their QB draw and trap. The defensive ends do a hard pass rush, maintaining outside leverage (do not let the QB roll outside the pocket). The outside linebackers line up on the inside shoulder of the inside receivers and get real physical.  It is also very important that the defenders get depth on their zone drops, playing the receivers high to low.  The middle backers have the hook zones.

This past season a spread offense opponent of ours implemented and ran a zone read play. This was the first time we faced a team that actually ran it very well.  Here is how we defended it:

Basically, the offense is reading the DE (red), if he slants down/crashes or stays flat footed the QB will pull the ball. If the DE keeps outside leverage the QB will hand the ball to the HB and he will cut off of the play-side double team.  The T wants to get onto the LB, which we can’t allow that to happen. Our DE (who usually has contain) will crash down, squeezing on the offensive tackle trying to release onto our LB. The LB will loop outside and have contain. They are basically just switching responsibilities. This confuses the QB and will make him pull (keep) the ball and run. The QB usually doesn’t even notice the backer looping around.  I like defending it this way because you are still able to cover the flats and take away the bubble and quick screens. It really doesn’t weaken the pass coverage defense. It also allows for our better tackler (LB) to have the QB, rather than our DE.

Here is an excellent article on the importance of the defensive linemen squeezing.

The Storm blitz on the other hand is a little more risky. This will leave us open in the pass game. This play will send the outside linebacker and he will take the QB. This is good because the DE (red) will slant/crash down and the LB, instead of having the QB (like he does on loop), he can help out on the HB when the QB starts giving the ball. Again, this one is a little more risky. They can really hurt the defense with a quick pass to the S vs this blitz.