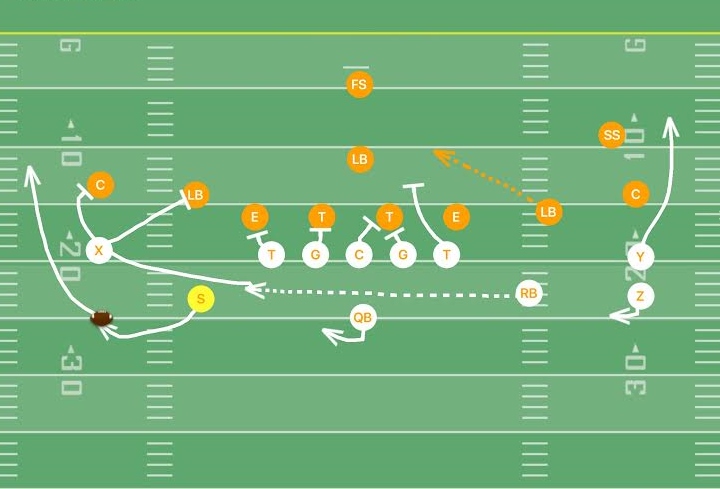 The inside slot receiver (RB) will come in full speed jet motion across the formation. To initiate the motion the QB can either give a verbal command or he can give a visual command, whatever you prefer. The QB must get the ball snapped when the motion player is  passing the far offensive tackle. If the motion is executed at full speed the defender following the motion player will be behind or delayed.  The motion player cannot go or lean forward when going in motion until the ball is snapped. We teach our players to keep their shoulders square to the side lines.

The inside receiver (S) to the left will run the bubble route.  When running the bubble screen play, make sure your receiver takes his first step outside and into the backfield.  It is vital that the bubble receiver gets depth and gets his head around after no more than two steps.  Once the ball is caught the (S) needs to get up the field and make a play! (S) looks to cut off of the (RB) block. Make sure the receiver knows to catch the first ball, then run. Also, if the receiver drops the ball make sure he understand he needs to fall on it.

The bubble screen play can really be an effective play on the youth football level. I implement some kind of bubble screen when I have a real good athlete that I want to get the ball to out in space.