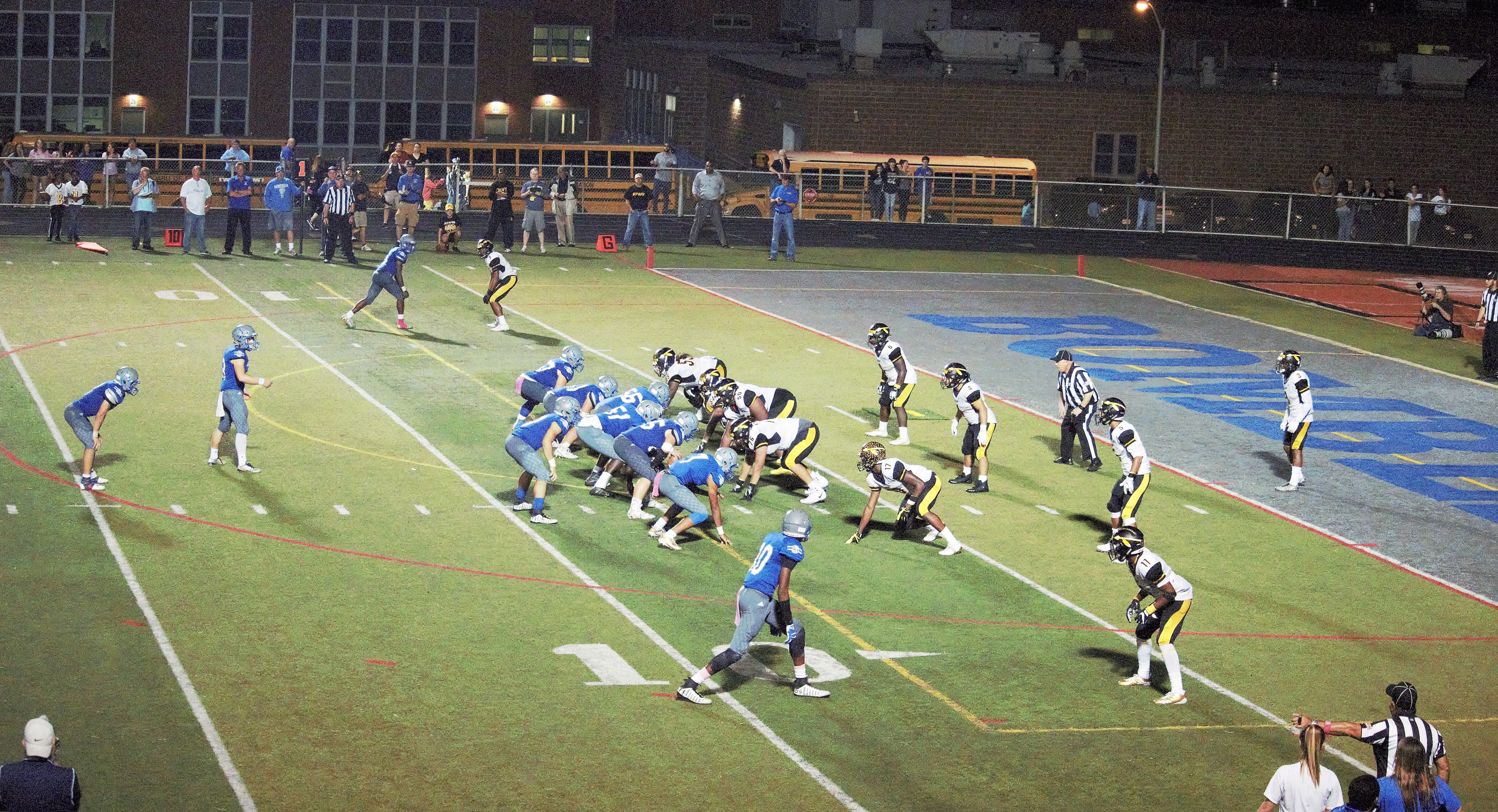 RG: Pull, kick-out defensive (long trap). Aiming point is the inside hip of the defensive end he is kicking out.

LG: Block down on the defensive tackle.

LT: Work onto middle linebacker. You can have the LT double team the defensive tackle with the LG.

H: Lead through the hole, look to block linebacker.

X: Stalk or runoff the cornerback.

Z: Stalk or runoff the cornerback.

T: Take handoff, look to cut off of the H’s lead block. Aiming point is inside of the guard’s kick-out.

There are several different formations you can have the H lead block out of. You can have him come across the formation (as the play diagram shows above) or you can put him play-side and just have him lead. I personally like having him come across then lead through the hole because defenses will usually shift or adjust defenders to the H back side.

RT: Block down on defensive tackle, work onto linebacker.

LG: Pull, lead through the hole.

H: Kick-out defensive end. Aiming point for this kick-out is the inside hip of the defender.

R: Block closest defender to threaten the bubble screen. You can have the R just runoff or stalk block the cornerback.

T: Take handoff, cut inside of the H’s kick-out block.

This is your basic power concept, where your fullback or in this case, your H kick-outs the edge defender and the backside guard leads through. The H should cheat his split up and inside which will create an easier blocking angle. It’s very important that the H is able to gut the defensive end out. The aiming point is the inside hip of the defender he is kicking out. He must gain inside leverage and really gut and drive the defender out. He cannot allow the DE to squeeze or cross his face to the inside.

H: Wham first defensive linemen inside the RT. It will usually be the N.

Z: Motion across, fake jet sweep. This will force the DE to expand and it will draw eyes.

T: Take handoff, aiming point is the outside foot of the RG. Look to cut outside of the H’s wham block.

1: Take snap, hand to the T. The QB needs to make sure he whips his head around so he doesn’t collide with the T.

You can also Wham a disruptive defense tackle. Utilizing the H-back will give you excellent blocking angles which will allow you to get a tough d-linemen washed or even kicked out. You can Wham pretty much any defensive linemen. It’s easy to teach and a must have in all playbooks that utilize an H-back.

Related Content: Coaching the H-back in the Spread Offense

RT: Base block the defensive end.

LT: Base defensive end out. Make sure he knows not to block the defensive tackle because that is who we are trapping.

H: Trap first defensive linemen past the center. Aiming point is the inside hip of the defender he is kicking out. It’s important that he drives through his block.

T: Take handoff, right up the mid-line. The point of attack can change based on the defensive front you are seeing.

1: Catch snap, hand to the T. The QB just catches the snap and hands to the T coming right inside, no steps, catch the snap open up and hand off to the T.

Related Content: Ways you can Utilize a Wing-back in Your Offense

C: Block defensive tackle or a head up nose guard.

RG: work onto linebacker, unless he is covered by a defender.

LG: Work onto linebacker, unless he is covered by a head up defender.

Y: Base block defensive end out.

X: Stalk or runoff the cornerback.

Z: Come in motion, fake jet sweep. This will influence the DE to expand.

T: Take handoff, aiming point is outside foot of the RT. It is the QB’s job to get the T the football out at the point of attack. The T should never come to the QB for the handoff.

The ISO play is one of the best plays that you can run with a H-back.  I drew up this play with a tight-end (Y) but it can very well can be executed out of a true spread formation. The ISO play is easy to block and the jet sweep action will influence defenders to widen, as well as capture some eyes (defenders looking at motion).