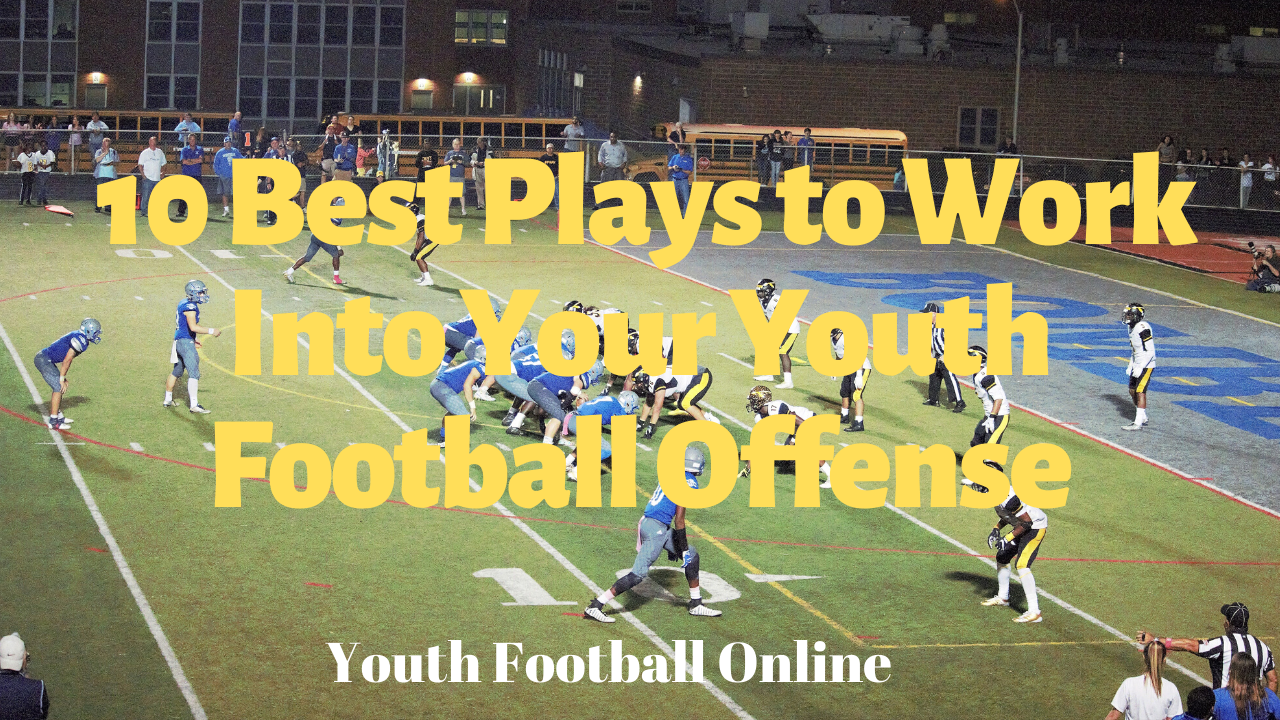 These 10 plays are great for all levels of football. These are all plays that you can build your offense around. Keep in mind that the best youth football plays should always have complements. For example, if you run a lot of Power, it’s important to have a play-action and a counter off of Power. Always have a pass and a counter off of your best running play. Here are the 10 Best Plays to Work Into Your Youth Football Offense.

Power out of 20 Personnel

The backside guard pulls and leads through the hole. The H back will kick-0ut the defensive end. The rule for the H is to kick-out the first defender outside of the right tackle. If you a have a mobile QB you can implement the read. The Power is one of the best plays in all of football. There are several different ways you can run the power. In addition, Power is a concept that can be executed out of any formation in football. I personally like running Power out of 20 personnel because spread the field will lighten up the box. Power is also great out of the Single Wing, Double Wing, and I-Formation!

Counter out of 20 Personnel

The Counter is a great complement to the Power Play. It will allow you to utilize a mobile QB. If you do not have a mobile QB you can bring in a running back and run it with him at the Q. The right guard will pull and kick-out the defensive end. The H will pull and lead through the hole. If you want you can cheat the H over more and have him kick-out and have the guard lead through. I like running Counter out of 20 personnel because it will force the defense to bump out defenders, giving us a lighter box.

The Jet Sweep is a great way to get your athletes the ball in space very quickly. What is great about Jet is you only really have to block 2-3 defenders to get big yardage. The motion will also force the defense to stretch horizontally, which will open them up for Counter or Wedge off of Jet Sweep. The 4 back will seal the play-side defensive end. The SE will block the OLB and the 2 will cheat his split over and lead block- tunnel the Cornerback. Make sure your offense breaks the huddle, gets set, and gets the ball snapped. You don’t want to give the defense time to adjust to your formation.

QB Wedge off of Jet Sweep

The Wedge play is easy to install and is essentially a play that has 6 or more blockers vs. one defender. It’s important to understand that you need to wedge your center, not a particular defender. This will ensure that your wedge is tight and really gains them momentum it needs. The Wedge is a play that many consider a short yardage play, but it has hit big for us several times. It is a really nasty play off of Jet Sweep. It’s our preferred interior play.

Waggle off of Jet Sweep

This is a great play because most of the time youth football defenses do not account for the motion player so he will be wide open. The CB will either sit and cover the motion player or he will bail back and cover the TE. If the CB sits on the Jet the TE on the Corner will be wide open. If the middle of the field is open the SE on the Post is an option. This is another great play off of Jet. Your QB also has an option to run the ball in the unlikely event that all the routes are covered.

Trap out of the Wing T

The Trap is a great way to take advantage of overaggressive defensive tackles that are taught to penetrate. This is a nice interior play off of Rocket Sweep. The LG is kicking out the Defensive Tackle- his rule is he is kicking out the first defensive linemen outside of the play-side guard. Aiming point for the kick-out is the inside hip of the Defensive Tackle he is kicking out. The QB needs to open up with his left foot, and get off of the mid-line.  Trap is one of the most underrated and underutilized plays on the youth football level.

Rocket Sweep is a great play because you only have to block 2-3 defenders in order to get big yardage. This play will force the defense to stretch horizontally, which will open up off-tackle or inside. The rocket motion will also add an element of deception to the play. Belly/Down, Trap, Counter, and play-action off of Rocket Sweep are deadly. Rocket is a play we like to run more so when we coach the older age levels of youth football.

The Post-Wheel is one of the best passing concepts in all of football. It’s a home run play off of Jet Sweep. When you run Jet, you are putting that outside linebacker in conflict. That OLB has to aggressively play the Jet Sweep in order to stop the play. Once you see the linebackers flying up for Jet Sweep that is when you hit them with Post-Wheel. When this play is called on a run down and distance it really catches the defense off guard. This is an excellent man to man coverage beater.

The RB Slip Screen is one of the best play in football. It’s a play that is very much underutilized on the youth football level. This has been one of our best plays for a long. This is an excellent way to beat man to man coverage. It’s also a great blitz beater. This play takes some practice to get down, but it’s worth the investment. Whenever you need a big play, go to this!

The Smash Concept is definitely one of the most commonly used passing concepts on the high school football level. However, you will see some teams run Smash on the youth level. This is a great pass concept off of play-action. Most of the time the defender covering the Z will bite up on run and the C will sit on the the hitch by the R and the Z will be wide open. Smash is also very good out of Double Tight-end formations as well. The QB progression is to first look for the Z on the corner route. Then to the L on the post. If the CB is playing off, you can throw the hitch to the R.

Smash out of Double TE

Running Smash out of Split-back Double Tight is my favorite way to run it. The double TE look will bring the defense in and allow the play-action to more successful. The Q’s read is the CB. If the CB sits on the hitch, he throws to the TE on the corner route. If the safety is flying over the top of the defense is giving you middle of the field open, your backside TE on the post could be open. At the end of the day, you want to hit the TE on the corner route- most of the time he’ll be wide open.